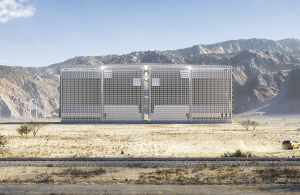 Supplying the world with renewable energy is a two-fold problem. The first is making technologies like wind and solar as robust and affordable as coal and natural gas. With recent estimates suggesting solar will outpace coal in 2025, that first problem is quickly being solved. The second one, figuring out how to store that energy, is a bit trickier.

Unlike fossil fuels, solar and wind can’t provide an uninterrupted stream of energy. After all, the sun sets and winds die, but scientists and engineers have developed myriad ways to store that renewable energy for when the grid needs it. One idea is to supplement lithium-ion batteries with iron-air batteries that could charge our homes via rust (yes, rust), or transform existing coal-fired power plants into nuclear ones. But another much talked about technology is what’s known as “gravity batteries,” which use regenerative braking and, well, gravity to send energy to the grid.

The big problem is exactly that—they’re big—making them unfeasible (and unattractive) for certain areas. However, earlier this month, scientists revealed a gravity battery that takes advantage of vestiges of dirty energy’s past by using millions of abandoned mines worldwide (with an estimated 550,000 of them being in the U.S. alone) to store energy.

The research into these new batteries, led by the International Institute for Applied Systems Analysis (IIASA), examined a technology known as Underground Gravity Energy Storage (UGES). At its most basic, this battery lowers large containers of sand into a mineshaft when energy is expensive (aka peak hours). Using regenerative braking, these mines would transform the sand’s potential energy into actual energy, and the bigger the mine, the bigger the battery.