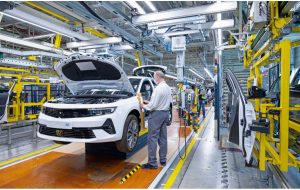 Automaker Stellantis is set to invest in a geothermal energy project in Germany with lithium developer Vulcan Energy Resources to help power a manufacturing facility for electric vehicles, Vulcan said on Tuesday.

The phased project is aimed at providing renewable heat to Stellantis’ Rüsselsheim manufacturing facility, which produces the DS 4 and Opel Astra models, Australia-based Vulcan said in a statement.

Vulcan will initially carry out a pre-feasibility study for the development of geothermal renewable energy projects in Rüsselsheim.

The parties will seek public funding opportunities together to advance the project, Vulcan said.

Stellantis, which holds an 8% stake in Vulcan, will aim to source funding for 50% of the project development after the first phase of the project.

Stellantis wants battery electric vehicles to make up 100% of its European passenger car sales by 2030. It recently signed a deal with Australian miner Element 25 for the supply of manganese sulphite for batteries for its electric vehicles.

Vulcan already has a deal with Stellantis to supply lithium from its project in the Upper Rhine Valley.