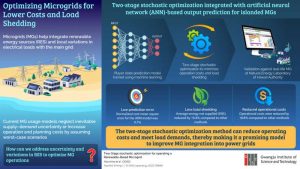 Renewable energy is seen as an answer to climate change, yet its uptake is limited by the variability and intermittent nature of most renewable energy sources. A promising solution to this problem is microgrids.

Microgrids are smaller, localized electricity grids that can be connected to the main grid of the region, but also can also be disconnected or “islanded” if needed. Models that guide the operation of microgrids, such as scheduling load shedding etc., are key to their efficient functioning. But thus far, most microgrid models have either neglected the uncertainty and variations in renewable energy or assumed the worst-case scenario, which can lead to an increase in energy not supplied (ENS) and operating costs.

To address this, a research team from Gwangju Institute of Science and Technology, South Korea, has developed a new two-stage stochastic optimization model to minimize operating costs and load shedding.

According to Dr. Yun-Su Kim, who led the study, “One of the problems with microgrids is that they sometimes cannot supply enough electricity for the load, causing load shedding, and at other times they produce too much electricity. In this paper, we created an operation algorithm that can reduce operation costs and load shedding.”

A key element to the new optimization model was the creation of an (ANN)-based prediction model for the power output of renewable energy sources. This power output is obtained in the form of a probability density function, i.e., it provides the likelihood that a given power output will be obtained at any given point of time, thereby accounting for variations and uncertainty in the renewable energy supply. This probability density function is then fed into a stochastic optimization model that makes operating decisions, such as scheduling.

The researchers validated their model using data from a microgrid designed by the Natural Energy Laboratory of Hawaii Authority. They found that the ANN predicted power output with a low error of 9.7%. The stochastic optimization model also offered an approximately 20% reduction in average ENS, as well as around 19% lower operating costs.

“Fossil fuels bring with them climate change and inflation. Reforming the power grid using microgrids can help renewable energy integration. Thus, improving the efficiency and integration of microgrids will bring us one step closer to energy security and stability,” concludes Dr. Kim.

The work is published in the journal Applied Energy.