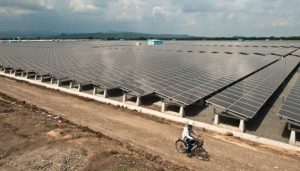 Is Southeast Asia ready to make the clean energy transition? This was one of the central questions asked during ASEAN Clean Energy Week, in Manila, as COP27 pushed into its second week.

Southeast Asia, home to nearly 700 million people, is one of the regions most vulnerable to the impacts of climate change. It is also heavily dependent on coal and is second only to South Asia for the world’s fastest-growing rates of greenhouse gas emissions.

According to the International Energy Agency’s Southeast Asia Energy Outlook 2022, energy demand in Southeast Asia will grow by three percent yearly by 2030, with three-quarters of the increased demand to be met by fossil fuels. This will result in a 35 percent increase in carbon dioxide emissions.

Elrika Hamdi, energy finance analyst at the Institute for Energy Economics and Financial Analysis, Jakarta, says that transitioning from fossil fuels is now a necessity.

“At this stage of the current climate crisis … it is a necessity for every country to transition away from fossil fuels,” Hamdi tells us. “All of the [Southeast Asian] countries are exposed to extreme climate risks that would happen if the world warms up to more than 1.5 degrees.”

Several issues, however, continue to hamper the region’s clean energy transition, says Hamdi, who was not involved in the conference. She tells us that these include lack of political commitment, economic downturn, lack of political stability, and limited financing.

“A good energy transition will have to start from a high-level political commitment from the central government,” says Hamdi, adding that setting a target with a corresponding roadmap would be critical in the transition.

The Manila conference held on 14–15 November discussed how governments are playing a balancing act in investing in renewable energy but still supporting fossil fuel-fed power plants for energy.

“Keeping the lights on will still be the main goal,” said Torbjorn Kirkeby-Garstad, the Southeast Asia manager of Scatec, a renewable energy solutions provider with its headquarters in Norway, and one of the speakers during the conference.

Availability of land is also an issue, given the competing demands for land for residential and agricultural uses. The innovative floating solar project in Laguna Lake in the Philippines aims to get around this issue.

Chris Chua, investment director and country manager of Blueleaf Energy, which partnered with SunAsia to develop an initial portfolio of up to 1.3 gigawatts of floating solar projects in Laguna Lake, says that various consultations and discussions are being held starting from the barangay—the smallest unit of government in the Philippines—to discuss the technology and tackle the project’s potential impacts, including on livelihoods and the environment.

Janssen dela Cruz, president of Terra Solar Philippines, explained that while there are no shortages of investors in renewable energy in the Philippines, the major issues that need to be addressed by the government are grid integration and congestion, the latter contributing to the higher generation cost caused by capacity constraints and limitations in the energy infrastructure.

On integration, he emphasized the need for a transmission development plan for renewable energy to address how the additional renewable energy can be connected seamlessly to the national electric infrastructure.

The region is also now starting to attempt to decommission fossil fuel-fed plants. On 14 November, the Asian Development Bank (ADB) signed a Memorandum of Understanding with Indonesia to jointly explore the early retirement of Cirebon-1, a 660-megawatt plant in West Java.

However, Alan Yau, group general manager of Metis Energy, a renewable energy infrastructure developer based in Singapore and another conference speaker, cautioned that there are potential consequences that need to be considered in decommissioning coal plants.

“Decommissioning coal plants will affect the employment of thousands of people, and this will have a social impact,” Yau said.

Included in the comprehensive approach to decommissioning Cirebon-1 is ADB’s commitment to supporting the 200 workers and communities that will be affected, in consultation with stakeholders.