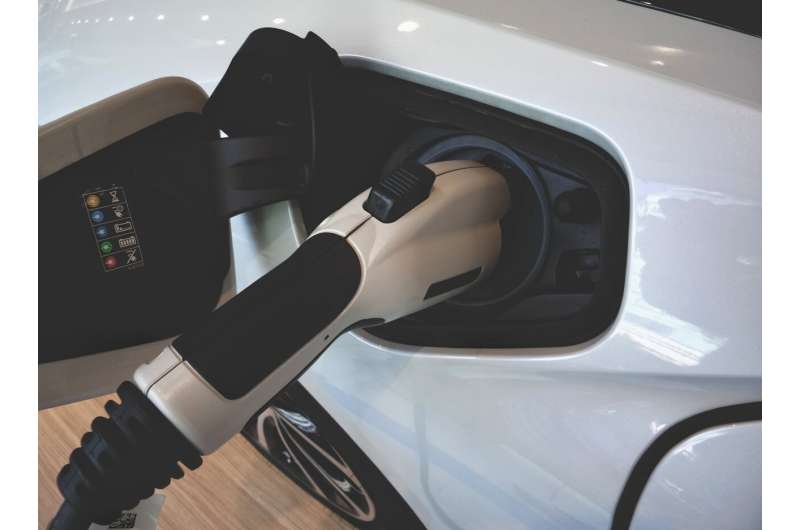 A new study by University of South Australia (UniSA) researchers shows that households with solar panels and batteries have a huge advantage when it comes to saving money on electric vehicles (EV).
With EV sales soaring worldwide, potential buyers are not just weighing up the price tag, but also the logistics and expense of charging the planet-friendly cars.
UniSA engineers have calculated that EV owners can reduce annual electricity costs by almost 40% if households are not totally reliant on the grid and they charge at home during off-peak periods.
In a new paper published in Renewable Energy, Professor Mahfuz Aziz and colleagues address EV owners’ concerns about charging costs, one of the main obstacles in opting for an environmentally friendly vehicle.
“Electric vehicles will become an important component of household energy consumption globally under plans to replace petrol-fueled cars within the next decade,” Prof Aziz says.
“For motorists with private car spaces, home charging is the most convenient option, but for those still totally reliant on the electricity grid for their energy, the costs could mount significantly.”
Record-low prices for rooftop photovoltaic (PV) systems and declining battery costs are encouraging households to “go green,” but consumers need to factor in multiple variables, researchers say.
Using data from South Australia, where over 40% of homes have rooftop solar panels, the researchers compared several household scenarios, considering EV charging demand, PV solar panel installation cost, battery degradation and export power limits.
Based on typical household energy consumption (17 kW/day in SA) and motorists’ average daily travel distance (36.7km in AU), researchers analyzed annual energy costs for households with petrol-based cars and those with EVs. They also analyzed energy consumption during peak periods, between 5pm and 9pm.
“In a basic case, all energy is imported from the grid where there are no solar panels, batteries or electric vehicles,” Prof Aziz says.
“When solar panels are added, about 20% less energy is imported and with batteries this is reduced by around 83%. When electric vehicles are added, consumed energy rises significantly but imported energy can be reduced by around 89% of total consumption.
“Our results demonstrate that households with petrol-based cars can reduce their annual energy costs by 6.71% using solar panels, and by 10.38% with the addition of a battery system. Replacing petrol-based cars with electric vehicles can reduce annual energy costs by 24% and 32% respectively. The most significant reduction (39.6%) can be achieved with off-peak charging.”
The research team includes Ph.D. student Ms. Yan Wu and co-supervisor Dr. Mohammed Haque. The team is currently investigating cost effective EV charging strategies for larger groups such as residential communities and university campuses while minimizing impact on the power grid and distribution feeders.
The popularity of electric vehicles is rapidly increasing across the globe, according to drive.com and it’s estimated that by 2030 there will be 145 million EVs on the road—compared to 11 million today. Despite the pandemic, electric vehicle sales increased globally by 43% in 2020, although only made up 0.7% of all car sales in Australia.
By 2030, however, at least 50% of all new cars sales in NSW are expected to be electric and other states are anticipated to follow this trend.
The paper, “Techno-economic modelling for energy cost optimisation of households with electric vehicles and renewable sources under export limits,” is published in the journal Renewable Energy.