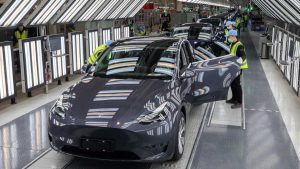 Lithium prices have more than quadrupled over the last year as the rush from automakers to produce electric vehicles gains momentum.

Why it matters: The spike in prices for raw lithium — a key material used in batteries — is fueling a rise in the price of EVs, hampering their appeal to consumers already dealing with inflation elsewhere.

Threat level: The price would be even higher had the Chinese Yuan not weakened against the U.S. dollar in recent months, Benchmark senior price analyst Daisy Jennings-Gray tells Axios in an email.

By the numbers: Average EV prices rose 15.6% in August, compared with a year earlier, to more than $66,000, according to Kelley Blue Book. That’s about $18,000 more than overall average new vehicle prices.

What to watch for: Whether automakers can achieve their goals of lowering EV costs while lithium prices remain elevated.