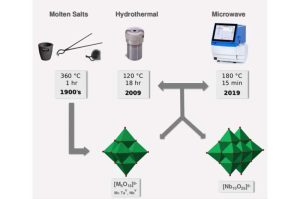 “These polyoxoniobates are water-soluble and can be synthesized in large volumes. They act as molecular building blocks, in the same way as when a child stacks Lego bricks,” Mark Rambaran says. “They can be used to make a wide range of materials, including supercapacitors that facilitate lithium-ion storage.”

Synthesis of polyoxoniobates can be done with microwave irradiation, because it is a rapid and efficient alternative to conventional hydrothermal methods, Mark Rambaran shows in his thesis.

“They can be made in 15 minutes using microwave irradiation, which is much shorter than the 18 hours needed in previous hydrothermal methods,” he says.

The nanometer sized molecules, can be dissolved in water and spin coated to deposit thin films of niobium pentoxide. When these films are heated to temperatures ranging from 200 to 1200°C, surfaces with varying corrosion resistance and electrochemical properties are obtained.

At higher temperatures, the films become crystalline and resistant to very basic conditions—and they are always resistant to acids. This approach facilitates deposition of alkali-free, metal oxide thin films with varying crystallinity, thickness and roughness.

“This ability to create niobium pentoxide thin films allows for an ease in testing pseudocapacitive properties, for example, which helps in developing electrochemical energy storage devices, such as supercapacitors,” says Mark Rambaran.

Due to the arrangement of the atoms in the crystalline niobium pentoxide, it creates channels that can easily accommodate the storage and release of lithium ions for more than a hundred-thousand cycles. This is what makes it a supercapacitor, and it offers electrochemical energy storage that can potentially replace a typical lithium-ion battery.

Lithium-ion batteries tend to have limited charge storage capabilities and long charge or discharge times of 10 minutes or more, while supercapacitors exhibit charging times as low as 10 seconds. The ability to quickly charge and discharge, allows supercapacitors to provide energy very quickly and efficiently. Furthermore, the use of water-soluble polyoxoniobates offers an easy and benign method for creating metal oxide thin films, which prevents the use of harmful starting materials like niobium pentachloride or niobium pentafluoride.

“The interest in developing new materials for energy storage is guided by necessity of mitigating climate change—the biggest and most urgent threat to humanity and the biosphere. To do this, improvement in the manufacturing of solar/fuel cells and batteries is necessary to enhance their electrochemical energy storage capabilities, while remaining environmentally friendly,” says Mark Rambaran.

Research focused on developing electrochemical energy storage devices or materials that exceeds the current capabilities of lithium-ion batteries is therefore crucial. Supercapacitors are considered as suitable candidates to rival, if not replace, lithium-ion batteries in terms of electrochemical energy storage. Current applications of supercapacitors include uses in electric vehicles, hybrid electric vehicles, trams, trains, consumer electronics and many more.