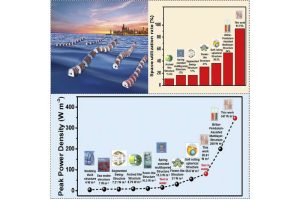 A team of researchers at the Chinese Academy of Sciences has developed a new way to generate electricity using ocean waves. In their paper published in the journal One Earth, the group describes how their new device works and how well it compared to other wave power devices.

Over the past several years, solar, geothermal and wind power have dominated the news surrounding the development of alternative energy sources. One source has been noticeably lagging—wave power. The world’s oceans and large lakes produce waves, which scientist have noticed could be used to generate electricity. Unfortunately, thus far, such efforts have not proven cost-effective. Current systems generally involve using wave action to push magnets through coils, which turns out to be bulky and expensive, not to mention inefficient. In this new effort, the team in China has taken a whole new approach to the problem—using waves to generate static electricity.

Other researchers have tried to engineer devices that can create static electricity using other types of movement, such as clothes or a backpack or even socks. But thus far, no products based on this approach have made it to market. In this new effort, the researchers are looking at a much larger device, one modeled after the anaconda snake.

Testing of their idea showed it capable of generating 347 watts of power per cubic meter, which they note is approximately 30 times better than other designs geared to reap electricity from waves. More work will need to be done on their system, however, before it could be put to commercial use. How to keep the coils from wearing away, for example, would need to be resolved.