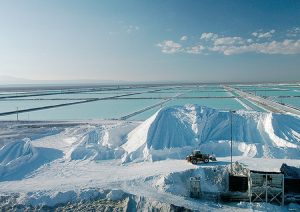 Lithium carbonate jumped to a new record Friday of 500,500 yuan ($71,315) a ton in China, according to data from Asian Metal Inc. The battery material has roughly tripled in the past year, and is more than 1,150% higher than a pandemic low touched in July 2020. Prices of lithium hydroxide are also gaining and closing in on an all-time high set in April.

That threatens to extend a squeeze on battery manufacturers and car producers that’s already eroding profits and prompting some suppliers to hike their own rates.

For the coming months, the sector is wary over issues like power supply in China, still the epicenter of production of lithium-ion cells and battery materials, during the winter heating season. Electricity outages in August in Sichuan province — home to more than one-fifth of China’s lithium refinery capacity — dented output, and added to market tightness.

Supply is continuing to lag behind rising forecasts for vehicle demand. The China Passenger Car Association projects EV sales in the world’s top market will hit a record 6 million this year, double the total in 2021. At the same time, commodities producers are struggling to bring new projects online, and to secure financing of approvals for future developments.

“A lot of OEMs and battery producers have been disappointed and have been let down by new producers or suppliers in the lithium space,” in the past several months, raw materials firm Livent’s CFO Gilberto Antoniazzi said at a conference this month.

Fresh concerns over the supply and price outlook prompted Chinese authorities to haul in lithium miners, refiners and other industry groups for a new meeting last week, according to the Ministry of Industry and Information Technology.

Unlike an intervention in March, which at least stalled lithium’s surge, authorities aren’t likely to deliver an impact this time “unless more concrete price control measures are being introduced,” Daiwa Capital Markets wrote in a note Friday.

Soc. Quimica & Minera de Chile SA, or SQM — the world’s No. 2 lithium producer — forecasts a “very tight market” for lithium in the years ahead, according to a presentation to investors in New York last week. Prices this quarter are likely to be slightly higher than the previous three months and remain elevated through the end of the year.

Lithium production might not align with demand until the end of the decade, Chris Ellison, managing director of Mineral Resources Ltd., a supplier of lithium raw materials with projects in Australia, told investors last month. “We’re in supply deficit at the moment and it feels like it’s going to stay there through at least 2030,” he said.