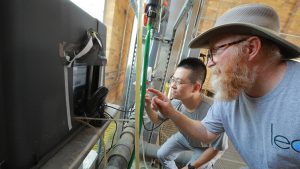 As danger looms in bodies of water globally where toxic algae blooms, a small plastic storage tub in Toledo sealed to protect against splashes, spiders and bird stool may contain a game-changing technology in the fight against the growing environmental problem.

Algae scientists at The University of Toledo are testing a real-time optical sensor at the Toledo Water Treatment Plant as part of its source water monitoring to protect the public drinking water supply during harmful algal bloom season.

Every 15 minutes the device takes a sip of Lake Erie water coming into the plant, reads the sample and puts the measurement data online for researchers and water utility managers to remotely access.

Its biggest value is the ability to tell whether tiny single-celled organisms known as cyanobacteria that compose harmful algal blooms in Lake Erie are fragile and starting to break open. If the cells break open, they release toxin. Dissolved toxin is more challenging for water treatment plants to remove because it can pass through filters and must be removed by chemical means before water leaves the plant for our faucets.

Since July, UToledo scientists have checked on the device’s wires and tubing to make sure it’s operating properly. They’re also doing laboratory experiments at the UToledo Lake Erie Center that are showing the technology is working the way it’s expected.

“Our work this summer with the PhycoSens device is the first test of this online algae monitoring system at a drinking water plant in the U.S.,” said Dr. Thomas Bridgeman, professor of ecology and director of the UToledo Lake Erie Center. “If we show success at the Toledo Water Treatment Plant and throughout the region to immediately detect and notify of toxin release, then it can be scaled up nationwide. So far it’s showing great promise.”

The test deployment of the advanced monitoring sensor system is part of a $1.4 million UToledo project funded by the U.S. Army Corps of Engineers that began more than a year ago and focuses on early detection and management of harmful algal blooms.

Since the 2014 Toledo water crisis left half a million residents without safe tap water for three days, researchers have greater clarity that it’s not just the size and appearance of the algal bloom that matters, but what is happening in the cells.

Bridgeman’s devices made by the German company bbe Moldaenke use optical sensors to measure in real time how much and what kind of algae are coming into the water treatment plant, including cyanobacteria. More importantly, the sensors can provide a warning of the cyanobacteria cells breaking open and leaking their contents, including any toxins that they may contain, into the water.

“A large release of toxin can happen in a matter of hours, and it is critical for water plant operators to have this information so they can adjust their treatment levels quickly, before dissolved toxin can get through the plant,” Bridgeman said. “The data are produced every few minutes, which makes it a useful early warning tool for a potentially rapidly changing algal situation.”

Notable for researchers is data collected in late July showing the peak of the bloom and its decline.

“So far we have not detected any of that cell breakage at the water treatment plant or near the water intake out in the lake using the automated sensor, which is good news,” Bridgeman said. “However, UToledo crews on our research vessel taking water samples out in the lake throughout Lake Erie’s western basin—not near the water intake—have detected cell breakage using the manual version of the same device this season.”

“It happened in 2019 and possibly in 2014 but not to a large extent this summer, at least not near the water treatment plant’s water intake out in the lake,” Bridgeman said.

The Toledo Water Treatment Plant’s laboratory makes the most use of the data.

“The experimental optical sensors being tested at the raw water pump station are a useful source for both the changes and the severity of algae levels coming from the lake,” said Jeff Martin, chief chemist at the Toledo Water Treatment Plant. “We didn’t have remote access to the data until part of the way through the bloom season due to computer issues, but since then it has been a welcome tool in treatment decisions.”

He said while the new instruments can detect the health, or physiological condition, of the cyanobacteria, they do not provide actual toxin readings, making them a supplemental weapon in a water utility manager’s arsenal to efficiently and economically adjust treatment to maintain drinking water safety.

“Measuring toxin still requires a separate, fairly time-consuming test,” Bridgeman said. “Therefore, the fast optical measurements will be coordinated with slower chemical toxin measurements to provide a complete picture of what is happening in the lake water that is entering the water plant.”

The device will be removed from the water treatment plant for analysis in October and then his team will study the results and potentially put it back in the plant next summer.

Bridgeman’s device monitoring tests are one part of a larger, wide-ranging project funded by the U.S. Army Corps of Engineers that also includes faculty in the UToledo College of Engineering.

Dr. Youngwoo Seo, professor of civil and environmental engineering and chemical engineering, leads the three-year project to improve water quality from the source to the tap.

Some of the technology and techniques being tested by UToledo are new to water treatment plants in the western hemisphere.

Dr. Dae-Wook Kang, assistant professor of civil and environmental engineering, leads a molecular approach to develop a robust detection method, and his analysis will help better understand what triggers the toxin gene production of cyanobacteria.

Seo is focused on mitigation and the treatment method for toxin removal. His laboratory is working on the biological degradation of cyanobacteria and their toxins using the naturally occurring bacteria and viruses from the lake and NSF-approved chemical treatments.