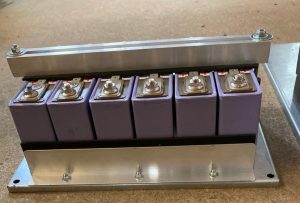 A big issue amongst those of us with environmental concerns is: What happens to the batteries? It is a fair question and one that deserves to be taken seriously and answered properly. Even RedEarth, which supplies stationary home batteries, finds this the most common customer concern. We can point to large firms like Redwood Materials and talk about shredding and refining and recovering, but perhaps there is a battery recycling step before that?

At a recent visit to Substation33 — a social enterprise that repurposes techno waste — I was treated to a story which is illustrative of the circular economy as it applies to electric vehicle batteries.

An early adopter of an electric vehicle bought a Mitsubishi i-MiEV. Although she initially found its range adequate for her needs, when battery upgrades became available, she had the work done by OZDIY. The used prismatic batteries from the i-MiEV were then sold to Substation33. At S33 these batteries were tested and repurposed to power signs warning of flooded roads. One i-MiEV battery will power 50 signs, and one sign has the potential to save many lives.

Substation33 is busy at the moment, as it is fulfilling orders for flooded road warning systems for Brisbane City Council. As the third year of La Niña approaches, they will be put to good use. Last wet season, Brisbane experienced over one metre of rain in a few days. Many areas in Queensland and New South Wales were flooded, some twice.

Repurposing EV batteries into flood warning signs is a great example of what can be done once they are no longer suitable to power an EV.

Substation33 also recycles batteries from digital devices. Since 2020 they have refurbished and delivered over 4000 recycled laptops to state schools in the Logan area south of Brisbane. Next year they will adopt the motto “2023 in ’23,” referring to the number of computers they hope to refurbish and deliver into the hands of local students and families.

Tony Sharp, Founder and Manager of S33, tells me that since my last visit 12 months ago, S33 has doubled the number of people it employs, doubled the income, and doubled its footprint. “We have no grand vision,” he says. “We just take the next step.”