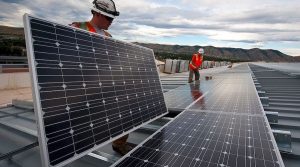 For the first time, investors seeking to pour cash into US clean energy projects can count on at least a decade of generous federal subsidies, offering them long-sought confidence in the staying power of the world’s third biggest renewables market.

Tax credits for wind and solar projects have underpinned explosive growth in US installations over the last decade. But they often have short time horizons, leaving project developers scrambling to meet looming deadlines and spooking risk-averse investors.

The long-term tax credit commitments for wind and solar, wrapped up in a $430 billion bill passed by the US Senate on Sunday, were joined by new credits for energy storage, biogas, and hydrogen. Developers of wind and solar projects will also be able to get more support if they use US-made equipment or build their projects in poorer areas.

“This is going to be a golden period of 10 years, at least,” said Keith Martin, an attorney with Norton Rose Fulbright who works on financing renewable energy projects. “That is a long horizon for people to plan and really get this transition to clean energy into high gear.”

The US House of Representatives is expected to pass The Inflation Reduction Act soon, and President Joe Biden should sign it into law shortly after that.

Shares of renewable energy companies have soared since Senate Democrats announced a deal to pass the bill on July 27. The WilderHill Clean Energy Index is up 15% during that time. The index includes US market players like solar panel maker First Solar, residential solar company SunPower Corp, renewable asset owner Brookfield Renewable and battery storage company Fluence Energy, among others.

Wind and solar accounted for just 12% of US electricity generation last year. But decarbonizing the nation’s electricity sector by 2035, as the Biden administration has pledged to do, will require far more.

Renewable energy investment hit $215 billion in the United States in 2021, according to the International Energy Agency, lagging behind China and Europe. Investors, project developers, bankers, and lawyers said the Inflation Reduction Act will drive a step-change in demand from a broad range of investors.

‘Our tactics have changed’

Shawn Kravetz, president of Esplanade Capital, which manages a solar-focused hedge fund, said his firm this year focused mainly on Europe’s renewables boom. US developers have struggled with pandemic-related supply chain disruptions, import tariff threats, and concerns about links to forced labor in China. The legislation, with its decade of policy stability, is changing that approach.

“Our tactics have changed because we’re seeing more opportunity in the US,” Kravetz said. “The magnitude and scope of the opportunity have just grown.”

The top US utility trade group said the bill would help speed up plans by many members to eliminate carbon emissions from their systems by 2050 because it creates subsidies for technologies beyond just wind and solar, which have intermittent supply.

“The expansion of those credits truly gives us more tools that we can use, not only to execute the plan, but we believe we will be able to accelerate it,” Warner Baxter, chair of the Edison Electric Institute, said in an interview.

For instance, Edward Lees, co-head of the environmental strategies group at BNP Paribas Asset Management, said he expected hydrogen would be “much more attractive,” with a tax credit of up to $3 a kilogram.

Lees said he had increased positions in hydrogen and solar ahead of the vote, betting on the bill’s passage.

Most renewable projects have been bankrolled by investors who take a stake in developments in exchange for the associated tax breaks, so-called tax-equity financing.

Going forward, developers will be able to sell certain credits without entering these “cumbersome, high-friction partnerships,” said Ted Brandt, chief executive of investment bank Marathon Capital. “That opens up the market and will go a long way towards alleviating the supply-demand imbalances we’ve had for years,” he said.

Some investors have hesitated to back projects due to uncertain returns, even as the effects of climate change have grown more apparent, from floods in Kentucky to wildfires in California. Longer-term tax breaks would “open the floodgates” for more financing, said Tom Buttgenbach, chief executive of US solar developer 8minute Solar Energy.

“Before this bill, we were looking at one- and two-year extensions on the tax credit while trying to finance projects that take three to five years to build. For the first time, this gives the industry and investors certainty for what the financing environment will look like through 2034.”