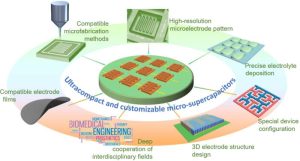 Increased demand for super tiny electronic sensors coming from healthcare, environmental services and the Internet of Things is prompting a search for equally tiny ways to power these sensors. A review of the state of ultracompact supercapacitors, or “micro-supercapacitors,” concludes there is still a lot of research to be done before these devices can deliver on their promise.

The explosion of demand in recent years for miniaturized electronic devices, such as health monitors, environmental sensors and wireless communications technologies has in turn driven demand for components for those devices that have ever smaller size and weight, with lower energy consumption, and all of this at cheaper prices.

Most illustrative of the requirement for such high-performance but tiny components for electronics are the emerging but substantial needs of the Internet of Things—the embedding of multiple micro-sensors that can receive, process and transmit signals across a range of applications from smart-home tech to healthcare. Such micro-sensors tend to be deployed in extremely limited spaces.

As these micro sensors—like their macro cousins—have to run on energy from somewhere, they have to be paired with equally tiny “micro-power” sources. But the incorporation of conventional energy storage devices such as batteries, even very small ones, makes the sensors far too heavy and bulky for Internet of Things requirements.

As a result, scientists and engineers have explored the possibility of turning sources of energy such as light or even mechanical vibrations into electricity, but this still calls for some sort of energy storage to compensate for these sources’ intermittency and instability.

What can do the job of a battery but need not be as bulky as a battery? Micro-supercapacitors are one option.

Capacitors may be familiar to electricians and electrical engineers, but the general public may be less familiar with how these work than they are with batteries. A capacitor stores energy but in the form of an electrical field instead of chemically as with a battery. It cannot store as much energy as a battery, but it can charge and release its energy much more quickly.

It is these MSCs that have received growing attention in the era of the Internet of Things, in particular to permit self-powered and wireless micro- and nano-electronic is. This is due to their exceptional power output, ultra-long lifetimes of roughly 100,000 cycles, more controllable diffusion paths for electrons or ions (the tiny kinetic “actors” that do all the work in electronic systems), adjustable output performance, and easy integration with super small systems.

“But there remain many challenges for all this to work,” said Zhong-Shuai Wu, co-author of the review paper and professor with the State Key Laboratory of Catalysis, at the Chinese Academy of Sciences. “So we thought it was time to put together a review article so that the field can better identify what we have got right, and what will still need to fix.”

Review articles are a key stage in the development of a young discipline so that researchers can clarify current understanding, identify challenges and research gaps. Reviews can also offer guidelines for policy and tips on best practice.

The reviewers concluded that the size of most MSCs that have been reported in the scientific literature remain too large to be easily incorporated into microelectronic systems. Limited attention has been focused on the fabrication of ultrasmall MSCs those smaller than ten square millimeters, and on hyper-compact confinement of electrolyte (a key element of MSCs) at the micro scale.

A chief challenge for MSCs continues to be the need to reduce the feature size, including the microelectrode length, width, and the gap between adjacent microelectrodes. All of this would improve the ability of integration of MSCs into the relevant devices. Along these lines, many MSC studies have focused on high-precision microfabrication techniques such as photolithography, laser scribing technique, focused-ion beam etching, and novel printing methods.

Other recent MSC advances include developing superior resolution, tunable output voltage, improved capacitance (the ability of the MSC to collect and store energy in the form of electrical charge), and deposition of shape-conformable electrolytes.

Despite a number of impressive achievements, especially at the nanometer scale, energy and power density remains unsatisfactory for cost-effective performance. In addition, theoretical understanding needs work. In this respect, the authors argue for greater interdisciplinary cooperation given the number of fields relevant to MSC research, and would like to see introduction of machine learning to assist with precise design of MSCs to more precisely match the disparate demands in different smart application scenarios.