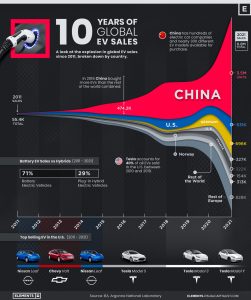 10 years of EV sales by country

With many countries getting plugged into electrification, the global EV market has seen exponential growth over the last decade. Using data from the International Energy Agency (IEA), this infographic shows the explosion in global EV sales since 2011, highlighting the countries that have grown into the biggest EV markets.

From 2011 to 2015, global EV sales grew at an average annual rate of 89%, with roughly one-third of global sales occurring in the US alone.

In 2014, the US was the largest EV market followed by China, the Netherlands, Norway, and France. But things changed in 2015, when China’s EV sales grew by 238% relative to 2014, propelling it to the top spot.

China’s growth had been years in the making, with the government offering generous subsidies for electrified cars, in addition to incentives and policies that encouraged production. In 2016, Chinese consumers bought more EVs than the rest of the world combined—and the country hasn’t looked back, accounting for over half of global sales in 2021.

China has nearly 300 EV models available for purchase, more than any other country, and it’s also home to four of the world’s 10 largest battery manufacturers. Moreover, the median price of electric cars in China is just 10% more than conventional cars, compared to 45-50% on average in other major markets.

Germany, Europe’s biggest auto market, sold nearly 700,000 EVs in 2021, up 72% from 2020. The country hosts some of the biggest EV factories in Europe, with Tesla, Volkswagen, and Chinese battery giant CATL either planning or operating ‘gigafactories’ there. Overall, sales in Europe increased by 65% in 2021, as evidenced by the seven European countries in the above list.

The US also made a comeback after a two-year drop, with EV sales more than doubling in 2021. The growth was supported by a 24% increase in EV model availability, and also by an increase in production of Tesla models, which accounted for half of US EV sales.

Tesla’s dominance in the US

Tesla is the world’s most renowned electric car company and its dominance in the US is unmatched.

Between 2011 and 2019, Tesla accounted for 40% of all EVs sold in the United States. Furthermore, Tesla cars have been the top-selling EV models in the US in every year since 2015.

Tesla accounted for over 50% of EV sales in the US in 2021 with the Model Y—launched in 2019—taking the top spot. Furthermore, the Model Y remained the bestselling EV in the first quarter of 2022, with Tesla taking up a massive 75% of the EV market share.

Despite Tesla’s popularity, it could face a challenge as other automakers roll out new models and expand EV production. For example, General Motors aims to make 20 EV models available by 2025, and Ford expects to produce at least 2 million EVs annually by 2026. This increase in competition from incumbents and new entrants could eat away at Tesla’s market share in the coming years.