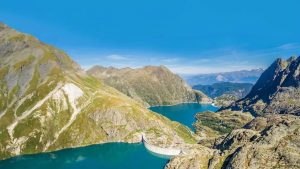 The 900 megawatt (MW) Nant de Drance pumped storage power plant in Valais, Switzerland, came online in July after 14 years of challenging construction and testing. The gigantic “water battery” is capable of storing enough hydroelectric energy to power as many as 900,000 homes.

The Nant de Drance “water battery” has a storage capacity of 20 million kWh of electricity. It will help stabilize Switzerland’s and Europe’s electrical grids by both reducing the chances of a grid overload when demand is high, and providing more power when it’s needed.

It took up to 650 construction workers working on the site at once, and around 60 companies working together to complete the project.

Six underground turbines are located 600 meters (1,968 feet) underground in a cavern between the Emosson and Vieux Emosson reservoirs in Valais, southern Switzerland.

Emosson, the lower reservoir, is the second-largest reservoir in Switzerland, and its 180-meter-high (590-feet-high) dam is the fifth tallest in the country.

The upper reservoir of Vieux Emosson holds 25 million cubic meters of water, which represents a storage capacity of 20 million kWh. It was raised by 21.5 m (70.5 feet) in order to double its capacity.

When there’s too much electricity in the grid, water is pumped from the lower reservoir to the higher reservoir, and the surplus energy is stored in the upper reservoir.

When power is needed, water flows from the upper reservoir and through the six underground turbines into the lower reservoir in order to generate electricity.