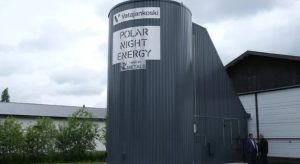 “We’re using sand that is heated up to a high temperature. The energy can then be stored for a long period of time.”

The company has installed the battery in a steel silo at the Vatajankoski power plant on the outskirts of the small town of Kankaanpaa in southwest Finland. The silo, measuring 23 feet high and 13 feet in diameter contains 100 tons of sand. The beauty of this material, according to the power plant’s managing director, Pekka Passi, is that it retains the heat without a significant loss for months on end and it doesn’t evaporate.

“You can heat sand to a higher temperature than water. We can heat the sand up to 500 degrees centigrade so you have much more storage capacity in the same volume, in the same space,” he said.

The relatively small silo, which is a pilot project for Vatajankoski, should provide enough heat for up to a hundred houses, distributed via a district heating system — a local network of insulated pipes. Passi loves the new technology.

“It’s quite cheap. It doesn’t have to be a special sand so it’s very inexpensive,” he said, “and I expect it will be low, really low maintenance.”

Polar Night Energy, which developed and patented the battery’s closed loop heating system, would not reveal the capital cost for reasons of commercial confidentiality, but the company insisted that overall it will be up to 10 times cheaper than existing high-temperature storage methods. And because of those very high temperatures, the company’s chief technology officer, Markku Ylonen, pointed out that the battery won’t only benefit residential customers.

“Our system excels in high-temperature applications, so we can provide really cost-efficient high temperatures to industrial processes,” he said. “Steam for the food industry for cleaning and sanitizing equipment, hot air for cement and steel production.”

Storing heat when renewable energy is plentiful, for use when it is not, makes perfect sense for Finland with its long dark and bitterly cold winters. Especially now, Ylonen said, that Russia has cut off all gas supplies to the country after it applied to join NATO.

“That has definitely boosted interest in our system,” he said.

Ylonen also believes that the world’s urgent need to make variable renewable energy more dependable has massively widened the market for the sand battery. “I would expect that the next one we build would be in Finland, but we hope to be global quite soon. We’re actually negotiating in tens of different countries, including America.”

There is one apparent flaw in the new technology: There’s a global shortage of sand for construction. But the Finns maintain that their battery will work with the lowest grade stuff available — and there are billions of tons of that around.