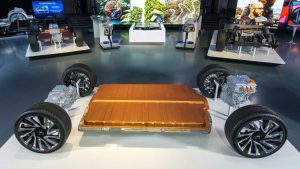 With the debut of the electric Chevrolet Blazer this week, we’re starting to get a clearer sense of the Ultium battery system General Motors has been developing along with LG the past several years and how it stacks up against the powertrains in vehicles on the market.

This has been a tortoise-and-hare race where GM got off to an underwhelming start relative to Tesla, which stormed out ahead of the pack a decade ago with longer-range EVs. While GM has been talking a lot about its plans to sell 30 EVs globally by 2025, Ford, Hyundai, Kia and Volkswagen have had more traction lately establishing themselves as challengers to Tesla.

GM has argued its Ultium-based vehicles may be a year or two behind, but they’ll be worth the wait. The automaker didn’t want to just retrofit the chassis of existing models and stick batteries into the floor. Its vehicles would deliver the longer driving range vital to win over consumers who haven’t yet been persuaded to go electric.

For the most part, GM looks like it will be vindicated, although not necessarily because of radically better range.

Two of GM’s Ultium-powered vehicles — the GMC Hummer pickup and Cadillac Lyriq SUV — just went into production, and a trio of Chevy EVs will go on sale next year. The Lyriq offers about 86 miles more driving distance on its 100 kilowatt-hour battery than the similarly priced Audi e-Tron.

GM estimates the Hummer pickup will go up to 350 miles, but with a massive battery in a 9,200-pound beast carrying all kinds of off-roading hardware, it’s difficult to gauge just how efficient it really is.

The Blazer offers the best indication yet of Ultium’s merits. The RS version will go an estimated 320 miles, compared to 318 miles for Tesla’s long-range Model Y, 314 miles for Ford’s Mustang Mach-E, 310 miles for Kia’s EV6 and 303 miles for Hyundai’s Ioniq 5. While Chevy may be able to brag about segment-leading range, it’s not a head-turning advantage.

That said, the Blazer is almost six inches longer and four inches wider than the Model Y and Mustang Mach-E, meaning it may offer a combination of slightly longer range and roomier interior. We’ll have to see once the model is available for a test drive.

As for upcoming pickups, GM’s electric Chevy Silverado will go about 400 miles on a charge with its 200 kWh battery pack when it goes on sale in less than a year. Ford’s recently launched F-150 Lightning goes 320 miles on a 131 kWh battery. So while GM will have an edge with respect to maximum range, Ford is holding its own in terms of efficiency.

That’s the bottom line: Even if Ultium ultimately doesn’t offer a huge advantage in terms of battery chemistry or power density, it enables GM to manufacture and market a much broader lineup of models.