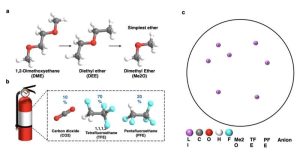 Lithium Ion-based batteries are among the most effective and widely used battery technologies. However, the batteries’ electrolytes mainly contain organic carbonated solvents, which are considered highly flammable with a narrow temperature window. To ensure that they don’t catch fire while operating at extreme temperatures, engineers must design safer electrolytes that are not only non-flammable, but also able to operate at a wide temperature range.

Researchers in the University of California San Diego’s Shirley Meng group and at the Army Research Laboratory have recently developed new liquefied gas electrolytes that could be used to produce lithium-metal batteries that can operate safely from -60 to 55 oC. These electrolytes have a unique structure, outlined in a paper published in Nature Energy, which make them capable of extinguishing fire.

“The liquefied gas electrolyte (LGE) was firstly conceptualized by our research group in a paper published in Science in 2017 and has been developed over five years,” Yijie Yin, one of the researchers who are working in this field from Prof. Meng’s lab, told TechXplore. “It consists of a variety of fluorocarbon gases, that when put under pressure, liquefies to form a chemically stable, low-freezing point, low-cost electrolyte.”

Compared with many state-of-the-art electrolytes introduced in previous papers, the LGEs designed by Yin and his colleagues are highly compatible with lithium metal batteries. In initial tests with a Li anode, it attained a performance of 99.6% average Coulombic efficiency (CE) over 500 cycles and was able to cycle 18650 cells under extreme conditions.

The initial LGEs designed by the team were based on fluoromethane (FM) and difluoromethane (DFM). Despite their advantages, these electrolytes were still flammable under moderate operating pressures.

“To overcome the safety concerns unveiled by our previous tests, we enshrined the safety features of the LGEs by incorporating clean fire-extinguishing agents into their composition, a capability unique only to LGE systems,” Yin explained. “1,1,1,2 tetrafluoroethane (TFE) and pentafluoroethane (PFE) are fire-extinguishing solvents, but also maintain low-freezing point, low-cost with reduced vapor pressure.”

The new LGE introduced in the team’s recent paper is made up in great part (i.e., above 80% of its volume ratio) of the clean, fire-extinguishing components TFE and PFE. This greatly increases their safety, drastically reducing the risk that lithium-metal batteries will catch fire at high temperatures.

“We also added a dimethyl ether to dissolve salts and form a highly concentrated salt-to-ether ratio electrolyte to provide a wide electrochemical window and stable interfaces towards Li and the cathode,” Yin said. “Owing to their low vapor pressure (~ 5 atm), the liquefied gas solvents could be easily recycled based on their vapor pressure difference at different temperatures.”

Most existing lithium-ion batteries use flammable electrolytes that cannot operate below
-20 oC and can overheat devices during overcharging. In the future, the LGE introduced by Yin and his colleagues could substitute some of these electrolytes, helping to improve the safety of lithium-based battery technology.

Due to their unique solvation structure, the electrolytes were developed not only maintain near constant conductivity over a wide temperature range of more than 130 degrees, but also ensure that the Li+ cation is a dominant transport specie instead of the anions in the current liquid electrolytes. Both these factors help with increasing battery rate performance allowing battery operations at low temperature.

In their recent experiments, Yin, Borodin and their colleagues demonstrated the many advantages of their improved LGE design, including their performance, their resilience to wide temperatures, and their sustainability. In addition, their approach highly unique, as it revisits some of the fundamentals of electrolyte design for battery technologies.

“Since dimethyl ether is a newly reported solvent, it features simplest ether which potentially be compatible with Li metal. It also has outstanding physical properties and electrochemically transport properties,” Yin added. “We now plan to tap dimethyl ether’s potential in other battery research—for example, batteries operating at ultra-low temperature. The pursuit of high-voltage (>4.5 V) batteries is also our interest. Our paper hasn’t addressed the high-voltage stability and we will further develop our electrolyte to reach that goal as well as maintaining performance versatility as our Nature Energy paper reported.”