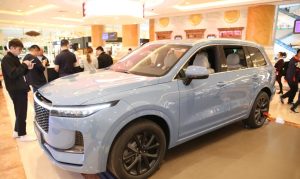 Electric-car owners may never need to worry about how far they can travel on a full charge again. In China, at least.

Last week, Chinese battery maker CATL announced that it will start producing a next-generation battery that can deliver at least 1,000 kilometers (620 miles) of driving range. The Qilin battery enters production in 2023.

Currently, the longest-range vehicle you can buy in the US is the $169,000 Lucid Air, the debut sedan from a California-based startup. It can travel 520 miles per charge, according to the Environmental Protection Agency.

The next best is Tesla’s Model S sedan, with an estimated range of 405 miles. An electric vehicle that can travel 600 miles or more would constitute an epic step forward in battery tech.

CATL, the world’s largest manufacturer of EV batteries and a supplier for Tesla, says the Qilin packs tons of energy into a compact package thanks to advancements in both battery chemistry and packaging. The battery has an energy density of 255 watt-hours per kilogram, according to CATL.

It will be 13% more powerful than 4680 batteries, the format Tesla recently started using for its Model Y SUVs, CATL said.

Any vehicle can have tremendous range if it’s packed with enough batteries. The challenge is ensuring those batteries don’t take up too much space or weigh an excessive amount.

Another benefit of the Qilin battery, according to CATL: Faster charging. The company sandwiched liquid-cooling components between the battery cells, enabling the pack to cool itself faster and, therefore, endure super-fast charging sessions without overheating.

It can charge from 10% to 80% in 10 minutes, CATL said, much faster than anything on the market today. But these are all estimates. And we’ll have to wait until the next-generation battery is on the road to understand how it really performs.

So far, two Chinese electric-car makers have said they’ll use the Qilin pack in future vehicles, according to Bloomberg: Hozon and Li Auto.