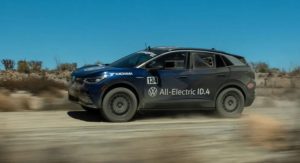 A recent report at CNBC gives us some very good news about Volkswagen. The company’s CEO for the American division, Scott Keogh, says that the company is actively looking for places to build at least one more battery and vehicle assembly facility in the United States.

“We are actively in the process of looking at another production facility and also looking at a battery facility,” Keogh told CNBC.

While this sounds good for the future of EVs built and sold in the United States, he didn’t give them specifics on where these facilities might be built. As it stands right now, Volkswagen’s American plant building the ID.4 is in Tennessee, but there’s no guarantee that any other facility will be anywhere near the existing one in Chattanooga.

Its Tennessee plant is a relatively recent development. Planned in 2008, the facility opened in 2011. The first vehicle was the Passat, a mid-sized sedan that’s a little bigger than the more popular Jetta. The second vehicle the company built at the plant was the full-sized 3-row Atlas SUV, which has been quite popular in the States (hey, we like our big SUVs). But, now the plant is expanding into EVs, with the ID.4 2-row crossover and the ID.Buzz (an electric van that resembles the old microbus).

This wasn’t Volkswagen’s first foray into the American vehicle production scene. Previously, the company built variants of the Volkswagen Golf (a small hatchback) at an assembly plant in Pennsylvania. That plant opened in 1978, but closed after 10 years because it wasn’t profitable. Production for many vehicles in the North American market stayed in Puebla, Mexico, with NAFTA-supported imports going from there to the United States.

Many people aren’t aware that Volkswagen kept making the classic Beetle design in Mexico until 2003, making the original Volkswagen one of the longest-produced cars in history. The old Beetle, with improvements like fuel injection and better interiors, kept its old shape in developing countries that didn’t have stricter safety standards because its low cost was all many drivers could afford. Mexican Beetles are popular imports in the US, because you can get a classic-style car that isn’t rusting and falling apart for fairly cheap.

But today, it makes more sense to produce the latest electric vehicles in the United States for the US market. While NAFTA is still a thing that protects a Mexican vehicle from import duties, exchange rate fluctuations, diverging US and Mexican vehicle buying trends, and supply chain issues make it easier to build cars for purchase closer to home.

EVs exacerbate these issues. While Mexico is a beautiful country with good people, the money for EVs just isn’t there in most people’s budgets for reasons far beyond the scope of this article’s room for explanation. Moving heavier vehicles from Puebla to the United States is more costly, too. So, at least for now, it makes sense for VW to build EVs in the States.

When it comes to the future of the United States, investment in battery production is not only a good thing, but vital for our future. If we get to the point where the batteries for our EVs are mostly coming from overseas, that drives up the cost of building cars and leaves us vulnerable to supply chain shocks and energy security concerns.

The more battery production we can get going in the United States, the better.