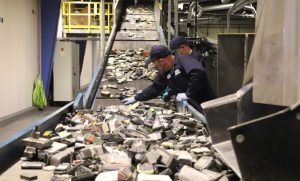 The recycler will focus on establishing commercial partnerships and building battery-recycling facilities in countries including South Korea, Japan, and Vietnam, according to Tim Johnston, Li-Cycle’s co-founder and executive chairman.

“We are really focusing on deployment outside of China in the APAC region,” Johnson said in an interview from the firm’s Toronto offices. “It’s more challenging these days to do work domestically in China than it has been. There’s a strong desire for a lot of Chinese companies to go globally and to expand outside China. For Li-Cycle, we’re better off supporting them in the ex-China context.”

Li-Cycle is among a handful of companies looking to cash in on demand for the recovered materials, with companies including Tesla Inc. expressing concerns over supplies of nickel and lithium. As the first generation of EVs nears retirement, a large quantity of electronic scrap is expected to be created.

Electric automakers, mining companies and chemical suppliers are racing to control more supplies of materials that are key to transitioning the world to cleaner energy sources. With mineral deposits getting trickier and pricier to develop, recycled batteries are expected to play a vital role in helping meet demand and may help tame soaring commodity prices that threaten to deliver the first rise in battery costs since at least 2010.

An estimated 62,000 metric tons of used EV and stationary storage packs reached their end of life last year, and that will rise to 4 million tons by 2035, according to BloombergNEF, Bloomberg’s energy and data analysis unit. Worldwide, consumers and companies are expected to buy almost 26 million EVs annually by 2030, and junkyards will take in nearly 1.7 million tons of scrapped batteries, according to BNEF estimates.

Li-Cycle already has facilities in Rochester, New York, Kingston, Ontario, and Phoenix, Arizona, and is building plants in Alabama and Ohio as well as Norway and Germany. The firm inked a battery metals deal with Glencore Plc last month and struck a deal with one of the world’s largest EV battery makers in December. It also got a $100 million investment from an arm of Koch Investments Group in September.

Such endorsements weren’t enough to stop one short-seller from voicing its skepticism. In March, Blue Orca Capital said it was shorting Li-Cycle, saying its promise of a low cost, low capital expenditure recycling model was “a fiction.’’ Shares of the recycler have declined 14% since then and more than 28% this year, broadly in line with peers in a market-wide selloff.

“It’s part of the entrepreneurship path — a lot of naysayers. Haters are going to hate,” Ajay Kochhar, co-founder and chief executive officer of Li-Cycle, said in the same interview, the first public comment from the company after the Blue Orca report. “We stand behind what we do. Our job is to focus on execution. We have many plants to build.”