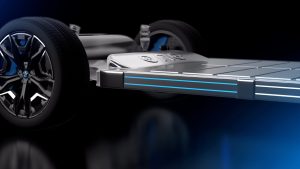 Michigan-based startup Our Next Energy (ONE) plans to demonstrate mixed-chemistry battery tech that it claims will enable 600 miles of range.

The startup on Tuesday announced an agreement with BMW to use the automaker’s iX electric SUV as a demonstrator of its new battery tech, called Gemini. The prototype is expected to be completed by the end of the year, ONE said in a press release.

The prototype Gemini battery pack will use different chemistries for different purposes. One will be devoted to power delivery, the other to energy storage. This not only boosts range, but also reduces lithium use by 20% and graphite use by 60%, while minimizing use of nickel and cobalt, ONE claims.

ONE is also marketing Aries, a 79-kwh battery pack using lithium iron phosphate (LFP) chemistry, with a cell-to-pack structure that eliminates battery modules. Chinese battery supplier CATL is also pushing a cell-to-pack configuration, and has boasted at a couple of points that it can also produce packs with a mixed chemistry.

Established automakers could also position themselves to install dual-chemistry battery packs in future EVs. Nissan is working on its own solid-state cells and hasn’t ruled out that they might be combined with other cell types.

While it hasn’t publicly experimented with dual-chemistry packs, Tesla is now selling LFP-cell vehicles in the United States alongside cars with its previous chemistries. As some Tesla buyers have discovered, one of the advantages of LFP cells is that they can be charged up to 100% every day without degradation concerns.