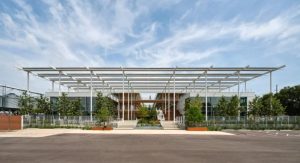 American architecture studio Gensler has completed the Fifth + Tillery office in Austin, Texas, which uses a canopy of photovoltaic panels to create shade for the plaza and roof terrace.

Named Fifth + Tillery, the three-storey mass-timber office complex is located on what was once an industrial site near the Colorado River in the East Austin neighbourhood of the Texas capital.

The 182,716-square-foot (16,975-square-metre) structure is defined by a tree-lined central courtyard that extends through the upper levels of the complex.

The courtyard can be viewed from many of the interior spaces of the building with Gensler describing it as a “raingarden” designed to resemble the “native ravine microhabitats of Central Texas”.

“An onsite reclaimed water system captures roof runoff, directing it to the raingarden and water feature that runs through the campus,” said the architecture studio.

Louvres with integrated fans were placed around the courtyard to improve airflow and ventilation in the outdoor spaces.

Gensler designed the open-air plaza as the building’s lobby with elevators opening directly to the outdoors.

“Part of our approach was to create a more social and communal building by turning a traditional office building inside out,” said Gensler design director Michael Waddell.

The interior of the courtyard space is lined with covered walkways on all the floors that are connected by a “monumental” staircase in the courtyard.

Over the entry plaza, Gensler placed a canopy of solar panels on metal stilts that provide shade for the entry and the rooftop terrace.

Large cisterns were placed near the entry in order to reference the industrial heritage of the site.

This canopy and the additional panels arrayed on the building’s rooftop provide 600 kilowatt-hours (kW) of power for the office.

“We took advantage of the roof’s large surface area to introduce a solar array that almost completely offsets the building’s energy use in the summer while providing shade for the roof and entry plaza,” said Waddell.

The facades of the buildings have punched window openings that help shade the interiors from the powerful Texas sun. In the courtyard, continuous glass facades were placed where there was more shading.

“This approach of strategically budgeting the glazing help reduce the envelope cost while also improving the thermal performance of the building,” Waddell told Dezeen.

The wood used throughout the building is Douglas Fir glued-laminated timber (glulam) sourced from Rosboro. Excess wood from the construction project was used to produce benches for the courtyard.

“The architectural approach is utilitarian and natural, utilizing a simple palette of industrial materials layered on to a hybrid timber structure that blends serenely into both neighboring districts,” said Gensler.

While no visible aspects of the industrial buildings that were on the site were used for the structure, certain aspects such as parts of the foundations, infrastructure and the water retention systems were re-used by Gensler.

Other recently completed buildings in Austin include a 3D-printed house by ICON and Lake Flato as well as an entertainment complex built using repurposed shipping containers.