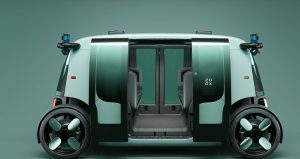 Google has Waymo, its autonomous robotaxi division. Not to be outdone, Amazon has Zoox, which is preparing to bring its battery-electric autonomous people mover to market in the near future. The difference is, Waymo relies on specially modified production vehicles like the Chrysler Pacifica and Jaguar I-Pace. The Zoox is designed from the ground up to transport people from point A to point B as conveniently and possible.

What is a Zoox? It is the closest thing yet to a horizontal elevator. It looks a lot like a Sunbeam toaster from the 50s when everything was streamlined and futuristic. In other words, it looks good in an industrial sort of way. A low floor height makes it easy to get in and out. Inside are 4 individual seats with 7-inch touchscreens that allow passengers to check the route, adjust the climate controls, or change the music. There is also a convenient wireless charging pad and USB-C port built into each seat.

It may seem counterintuitive, but the interior is designed to reduce visual stimuli. Zoox co-founder and CT Jesse Levinson told TechCrunch at its annual mobility conference this week, “It’s not about super-fancy 3D gaming. We’re not bombarding you with like screens and advertisements everywhere.” That’s a welcome relief.

The Zoox doesn’t have a front or rear. Instead, it is bidirectional with the same sloped face featuring cameras, lights, speakers, and a large window on either end. “Internally, we call it a north side and a south side,” Levinson said. The design features a sensor pod atop each corner of the robotaxi, which allows the vehicle to see in all directions. The corner architecture helps “see basically everything, including things behind things.”

“The shape of the vehicle is perfect for autonomous driving because each of those sensor pods has a 270-degree field of view,” Levinson said. “Because there’s one on each corner, not only can we see everything 360 degrees but we have an overlapping, redundant field of view that helps us see around things.” Since it was revealed in December of 2020, the company has been working toward making it safe and legal on public roads. Levinson declined to give a time frame, but said the company is “really close.” A 133, kWh battery is designed allow the vehicle to drive all day without recharging.

The beam-forming speakers mounted on either end of the vehicle can shoot sound in any direction with a targeted focus, alerting specific distracted pedestrians with a ping that’s more polite than a honk. “They will hear it and everybody else won’t,” Levinson said.” The passenger experience “actually gets quite boring after 30 seconds,” he said, “but that’s a good thing because people just want to get on with their lives, have a conversation, read a book, play with their iPhone or whatever they want to do.”

The ceiling features a pinpoint light display Zoox calls a “celestial headliner,” `modeled after what you might find in a modern Rolls Royce. “It’s a little bit of our prestige feature,” Levinson said. “If we ever have to build a lower cost version, that’s probably the first thing to go.”

Robotaxis are touted as the cutting edge of future transportation, especially in cities. Elon Musk said recently it will build one really really soon (in other words, sometime after the Semi, the Roadster 2.0, the Cybertruck, the humanoid, and the Model 2 are in full production, God willing and the creek don’t rise). Frankly, the Zoox vehicle seems perfectly designed for its intended purpose. We expect it to be a hit with users and provide a first class customer experience.