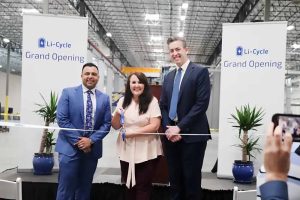 Lithium-ion battery recyclers are moving forward with new facilities, with Li-Cycle bringing a plant on-line and Blue Whale Materials announcing plans for five plants in the U.S. and Europe.

It has capacity to process up to 10,000 tons of manufacturing scrap and end-of-life batteries per year, a press release said, and is the first to use Li-Cycle’s proprietary technology to process full EV battery packs without dismantling them manually, making recycling safer.

“Arizona presents a significant opportunity for lithium-ion battery recycling due to the emerging electric vehicle (EV) supply chain in the region, as well as its close proximity to large markets such as California,” the press release said, and the new facility is close to the company’s existing battery and manufacturing scrap supply network in the Southwest.

The 140,000-square-foot facility’s primary output is black mass with a number of valuable critical metals, the press release said. Li-Cycle will convert that into battery-grade materials at its first North American hub facility, which is currently under construction in Rochester, N.Y. and slated to come on-line in 2023.

“We are pleased to announce that our Arizona Spoke is operational,” said Richard Storrie, Li-Cycle regional president of the Americas. “This new state-of-the-art facility enhances our ability to serve the recycling needs of our customers, while significantly increasing our operational recycling capacity.”

Another facility in Alabama, which has the same design as the Arizona facility, is scheduled to be operational in the third quarter of 2022. When both are on-line, Li-Cycle will have a total processing capacity of 30,000 tons per year, the press release said.

Blue Whale Materials has secured an investment of up to $80 million from Ara Partners to help the company build a lithium-ion recycling network in the U.S. and Europe.

“As electric vehicles, smart devices and electric storage technologies continue becoming a larger part of modern life, manufacturers will require an increasing supply of materials like cobalt, nickel and lithium to make the batteries needed to keep up with demand,” the press release said.

Blue Whale Materials plans to use its proprietary technology, which has been validated at a commercial scale plant in Asia, to recycle lithium-ion batteries and produce new battery components.

“The BWM team has the operational experience, strategic relationships and motivation to build a leading LIB recycling platform domestically,” said Tuan Tran, a partner at Ara Partners. “The market opportunity is tremendous and we are thrilled to partner with the BWM team.”