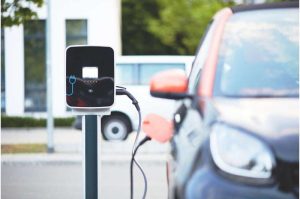 Transportation is the single biggest source of greenhouse gas emissions in the United States, accounting for about a third of all emissions. We could quickly lower those emissions by electrifying vehicles, but there’s just one hitch: we don’t currently generate enough power.

“If all transportation goes electric, we are effectively doubling demand,” said Matthias Preindl, an EV expert at Columbia Engineering. “And the grid isn’t built to withstand that.”

Despite some investment and expansion since the 1950s, the U.S. grid has a mostly aging fleet of generators, and maxed out transmission loads due to congested lines. Making matters worse, extreme weather events like heatwaves and wildfires have repeatedly melted power cables.

The U.S. would have to invest $125 billion by 2030 just to keep up with EVs’ growing demands for power, according to a 2020 study. But what if the EVs themselves could be part of the solution, adding power to the grid? Columbia News spoke with Preindl, a professor of electrical engineering, and Daniel Bienstock, a professor of applied physics and applied mathematics, as well as industrial engineering and operations research.

By 2030, some 145 million electric cars, buses, trucks, and vans will be on the road. Sort of. On average, drivers park their vehicles 95% of the time. With close to $5 billion in federal money recently allocated to build a nationwide network of EV charging stations along interstate highways, all those idle EVs could be put to work via vehicle-to-grid (V2G) technology—an idea experts say could transform the already overwhelmed electrical grid.

V2G technology involves using bidirectional chargers to carry unused power from an EV’s batteries into the smart grid. As an EV gets charged, the grid’s AC (alternating current) electricity is converted to the batteries’ DC (direct current)—which is then used to run the vehicle. A bidirectional charger can convert DC to AC and transfer it to the grid from the EV’s lithium-ion cells. It can also simultaneously control how much power enters or leaves the battery.

The extra electricity that V2G technology feeds back to the grid could power homes and businesses in states like California that heavily rely on renewables for 24-7 access to electricity. Often, green energy efforts have primarily focused on using large wind or solar farms located in remote areas. These farms require new and expensive transmission lines to provide electricity to areas with high-energy demands.

And wind and solar energy can experience large real-time variability, said Bienstock, who is also an expert on power-grid dynamics at Columbia Engineering.

“Today, without large renewable penetration, variability is addressed in real-time using conventional generation,” he said. “Large, real-time swings in power flows can be challenging and require proper set up of rapid generation and adequate transmission resources.” Upgrading equipment to that extent is no small feat, which means that variability due to renewables will continue to be a concern. “V2G, coupled with more fully distributed generation, is one of the most viable solutions moving forward,” said Bienstock.

Cars that have V2G

But building bidirectional power into the system is more than a numbers game; technical hurdles also stand in the way of widespread V2G adoption. For instance, routinely using V2G for recharging and discharging EVs’ lithium-ion batteries can reduce their lifespan.

“From a grid perspective, it’s most useful when many EVs are connected over long periods and when they use low to medium charging powers,” said Preindl. “That’s actually better for the EV as well. From a technical standpoint, there are a lot of things V2G can do to minimize battery degradation.”

Other than the risk of lithium-ion batteries getting damaged, conventional designs of bidirectional or V2G chargers are also expensive. There are two types of V2G chargers: onboard and offboard. Most cars use unidirectional onboard chargers. The few V2G chargers to hit the market have only come online in the past few months; these early designs are typically offboard, mounted to a wall and also lack standardization, while the industry catches up to the technology.

But researchers are getting better at designing cost-effective V2G on-board chargers. Preindl’s lab is developing systems that can achieve 99% efficiency for as little as one cent per kilowatt. “That’s two to five times cheaper, with two to five times lower energy losses, than current designs,” he said.

The possibility of V2G

While car companies are attempting to scale V2G technology, there is still a long way to go before it can help in decarbonizing the grid. Last month, around 15 utilities in 14 states announced that they will launch pilot electric school bus V2G programs, according to the World Resources Institute.

But despite utility companies’ small initiatives in 2021 that proved how effective V2G technology is in reducing emissions, policy experts say more investments are required to make the technology accessible.

“The utilities need to not only upgrade the electrical grid in terms of new transmission lines and physical transformers but also invest in smart grid technology to assess at what times electricity needs to be discharged or absorbed,” said Steven Cohen, an expert in environmental science and policy at Columbia’s School of International and Public Affairs. “The policy hurdle V2G technology is facing is basically a lack of money.”

“The key requirement would be a financing scheme in which the federal government could fund the initial outlay,” he continued. “Then, local ratepayers pay for the operation and maintenance once the technology is in place. My prediction: New York State and California will be first to invest.”