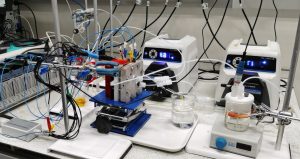 A new approach to battery design could provide the key to low-cost, long-term energy storage, according to Imperial College London researchers.

The team of engineers and chemists have created a polysulfide-air redox flow battery (PSA RFB) with not one, but two membranes. The dual membrane design overcomes the main problems with this type of large-scale battery, opening up its potential to store excess energy from, for example, renewable sources such as wind and solar. The research is published in Nature Communications.

In redox flow batteries, energy is stored in liquid electrolytes which flow through the cells during charge and discharge, enabled through chemical reactions. The amount of energy stored is determined by the volume of the electrolyte, making the design potentially easy to scale up. However, the electrolyte used in conventional redox flow batteries—vanadium—is expensive and primarily sourced from either China or Russia.

The Imperial team, led by Professors Nigel Brandon and Anthony Kucernak, have been working on alternatives that use lower cost materials which are widely available. Their approach uses a liquid as one electrolyte and a gas as the other—in this case polysulfide (sulfur dissolved in an alkaline solution) and air. However, the performance of polysulfide-air batteries is limited because no membrane could fully enable the chemical reactions to take place while still preventing polysulfide crossing over into the other part of the cell.

Dr. Mengzheng Ouyang, from Imperial’s Department of Earth Science and Engineering, explained: “If the polysulfide crosses over into the air side, then you lose material from one side, which reduces the reaction taking place there and inhibits the activity of the catalyst on the other. This reduces the performance of the battery—so it was a problem we needed to solve.”

The alternative devised by the researchers was to use two membranes to separate the polysulfide and the air, with a solution of sodium hydroxide between them. The advantage of the design is that all materials, including the membranes, are relatively cheap and widely available, and that the design provides far more choice in the materials that can be used.

When compared with the best results obtained to date from a polysulfide-air redox flow battery, the new design was able to provide significantly more power, up to 5.8 milliwatts per centimeter squared.

As cost is a critical factor for long-term and large-scale storage, the team also carried out a cost analysis. They calculated the energy cost—the price of the storage materials in relation to the amount of energy stored—to be around $2.5 per kilowatt hour.

The power cost—the rate of charge and discharge achieved in relation to the price of the membranes and catalysts in the cell—was found to be around $1600 per kilowatt. This is currently higher than would be feasible for large-scale energy storage, but the team believe further improvements are readily achievable.

Professor Nigel Brandon, who is also dean of the Faculty of Engineering, said: “Our dual-membrane approach is very exciting as it opens up many new possibilities, for both this and other batteries. To make this cost effective for large-scale storage, a relatively modest improvement in performance would be required, which could be achieved by changes to the catalyst to increase its activity or by further improvements in the membranes used.”

The spin-out company RFC Power Ltd, established to develop long-duration storage of renewable energy based on the team’s research, is set to commercialize this new design should the improvements be made.

CEO of RFC Power Ltd, Tim Von Werne, said: “There is a pressing need for new ways to store renewable energy over days, weeks or even months at a reasonable cost. This research shows a way to make that possible through improved performance and low-cost materials.”