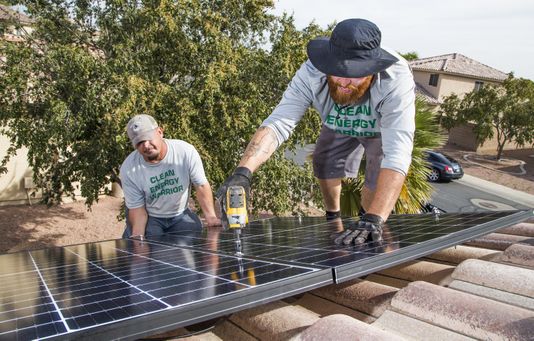 As temperatures plunge during shorter winter days, solar power might be the last thing on your mind.

But renewable energy advocates and environmentalists say winter would be a reasonable time to consider going solar.

Solar energy will play a growing part of the Phoenix energy supply in one way or another. The Arizona Republic reported in November that Salt River Project plans to add 1,000 megawatts of solar capacity to its system over seven years, enough energy to supply about a quarter million homes.

Many homeowners aren’t waiting, opting instead to install their own rooftop systems. Phoenix residents tend to wait until closer to summer before exploring options and signing contracts, said Brandon Cheshire, founder of SunHarvest Solar. There are pros and cons to this.

Along with weighing those benefits, there are other questions related to weather, climate and even animals that people new to solar energy have asked.

From how to stop pigeons from nesting on solar panels to whether extreme heat would affect a photovoltaic, or PV, system, several experts discussed common misconceptions about how the environment affects rooftop solar power.

1. Is summer a better time to install solar panels?

Not necessarily. Although Phoenix racks up nearly 300 days of sunshine every year, solar companies find most people don’t think of installing a PV system until summer is nearly upon them.

“We get most of our inquiries at the start of summer, when people get their first big electrical bill,” Cheshire said. “Then they start winding down close to the holidays and tax season when people are more preoccupied with travels, buying presents, school being out.”

But there could be a few advantages to starting the installation process in the winter. For starters, there’s the benefit for workers, who would prefer laboring in the cooler temperatures of winter rather than the 100-plus degree days of summer.

“In the summer, crews want to be off the roof during the hottest part of the day, so they could be up there as early as 4 a.m. making noise,” Cheshire said.

Another important thing to consider is that it could take 60 to 90 days, possibly more, until your solar panels are fully operational after signing a contract. That means if you wait until summer to start the process, you might not have functioning solar panels on your roof until summer is over, Cheshire said.

Utility companies will need to send someone to inspect and approve a PV system once it’s installed. Since summer is a busy time when most people begin signing contracts, you might encounter delays with your utility company, he added.

This is what Phoenix resident Margaret Mills said happened to her. Mills has had a lease with Sunrun since 2016.

“My panels were up for three weeks before they could be turned on,” she said.

“The hotter your panels get, the less productive they are,” said Ronald Roedel, the director of the Solar Energy Engineering and Commercialization program at Arizona State University. “It matters less if it’s 110 degrees or 35 degrees, what matters is the amount of light.”

Although Phoenix’s extreme heat reduces the performance of PV systems, there are also more hours of sunshine in the summer, so it balances out, Roedel said. On the other side, winter days are shorter, but solar panels collect energy more efficiently.

3. How do weather events like heavy rain, hail and dust storms affect a PV system?

“Extreme weather affects PV systems everywhere,” Roedel said. “Anything other than our typical blue, cloudless skies. That is why you have the grid to back you up.”

If the power goes out during a storm, don’t expect your PV system to still work. Since your PV system depends on the energy grid, when the grid is down, your PV system will also be down, unless you own a battery and can use what is stored.

But batteries are expensive and the majority of residential solar power users do not have one, Cheshire said. While other states have invested in neighborhood battery storage, that is currently not possible in Arizona, he added.

Other weather-related events could also affect solar panels. The accumulation of dust — after a monsoon-season haboob, for instance — can block light from entering your panels. But dust, in general, shouldn’t be too concerning.

“What we have noticed is that here in Arizona, the dust is loose and blows off in the wind, or rain is enough to clean it off,” Roedel said. “I have a friend here who has had a PV system for 30 years and has never once cleaned them.”

Roedel, who has owned a PV system for four years, said he also never washes his panels. Washing the panels would be a bigger concern in places outside the U.S. where the dust tends cling more, he said.

“Even when it hailed marbles, my panels survived,” he said. “Solar panels are very robust. They go through an incredible torture test before they’re ever put on the market. That said, a solar panel probably can’t withstand a bullet or if you started hitting it with an ax.”

4. How do I stop pigeons from nesting around my solar panels?

When Mills got her solar panels from Sunrun installed more than two years ago, her friends brought up one concern she hadn’t considered: keeping the pigeons out. Although a flock of pigeons on her street once gave her initial worry, she felt relieved when the pigeons passed her in favor of a neighbor’s roof instead.

“Pigeons aren’t interested in foraging on solar panels or eating wires, which are tucked away anyway,” Cheshire said. “They’re not really a problem unless there are a lot of them, then the pigeons are more of a pest and can be a pain to clean up after.”

Cheshire said SunHarvest offers “pigeon proofing,” which consists of a physical barrier made of poly-coated steel placed at the bottom of the panels. The guards prevent birds from going there, but otherwise, pigeons, in general, shouldn’t present a problem.

In about 25 percent of the cases SunHarvest sees, shade is an issue, not just from trees, but from power lines, neighbors and mountains, Cheshire said. That’s why an in-person evaluation is required.

If a tree is going to grow and affect unfettered access to sunlight, the engineers will try to design around it to minimize the impact, he said. SunHarvest uses software analysis to estimate how much the shade would affect sunlight collection.

If there is no choice but to remove the tree, homeowners must weigh whether the benefits from going solar will outweigh the cooling shade from the tree.

6. Don’t solar panels produce the most amount of power midday, when I’m not home to use it?

It’s true: The biggest utility load occurs when people come home from work and turn on all their appliances. And PV systems produce the most power at high noon, when the sun is highest in the sky. But since solar users are connected to the grid, which can provide backup power, they don’t have to limit their electrical activities to noontime.

“You have to look at the overall period of time, one whole year,” Roedel said. “On average, you make more power than you need. You shouldn’t worry about one time of day or one month because that’s just a snapshot.”

“In the winter you probably produce more than enough energy,” Roedel said. “You can sell the excess back to your utility company and get credit, then in the summer use that credit to buy additional energy.”

Roedel said PV systems are designed by looking at annual load, then adding 25 percent more. So if a homeowner uses 1,000 kilowatt hours per year on average, the solar company will install a system that can produce 1,250 kWh.