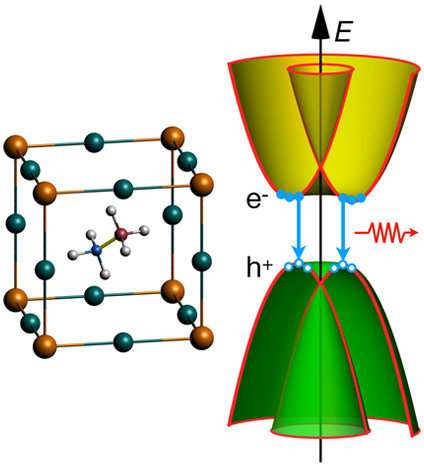 Hybrid perovskites are spectacularly efficient materials for photovoltaics. Just a few years after the first solar cells were fabricated, they have already achieved solar conversion efficiencies greater than 22 percent. Interestingly, the fundamental mechanisms that are responsible for this high efficiency are still being vigorously debated.

Hybrid perovskites are a group of materials that combine organic molecules with an inorganic framework in a perovskite lattice structure. A number of research groups previously attributed the high efficiency of the hybrid perovskites to an indirect band gap originating from strong spin-orbit coupling. It was argued that the indirect nature of the gap suppresses radiative recombination between electrons and holes and thus minimizes undesirable carrier recombination. UCSB postdoc Xie Zhang and Ph.D. student Jimmy-Xuan Shen (who has since graduated) demonstrated that this was incorrect by developing a cutting-edge, first-principles approach to accurately determine the spin texture of the band edges and quantitatively compute the radiative recombination rates. For methylammonium lead iodide (the prototype hybrid perovskite commonly referred to as MAPI) they found that the radiative recombination is actually as strong as in conventional direct-gap semiconductors.

“This result should put an end to misguided attempts to analyze and design device characteristics based on erroneous assumptions about the recombination rate,” said Zhang.

Strong radiative recombination means that these materials are also useful for light-emitting diode (LED) applications. However, current densities in LEDs are much higher than in solar cells, and at high carrier concentrations nonradiative recombination processes can become detrimental. Such nonradiative losses have been observed, but experimentally it is not possible to identify the microscopic origins. Shen and Zhang built on expertise in the Van de Walle group to accurately compute the recombination rate from first principles. They also managed to precisely link the rate to features in the electronic structure.

“Auger recombination is a process in which two carriers recombine across the band gap and the excess energy is transferred to a third carrier,” explained Shen. “We found that the Auger coefficient in MAPI is unexpectedly large: two orders of magnitude larger than in other semiconductors with comparable band gaps.”

The researchers identified two distinct features of the material that are responsible: a resonance between the band gap and the spin-orbit-induced splitting of the conduction bands, and the presence of structural distortions that promote the Auger process.

“These calculations are extremely demanding, and the compute power provided by NERSC has been instrumental in obtaining these results,” commented Van de Walle. “We have been able to demonstrate that Auger losses can be suppressed if lattice distortions are reduced, and we propose specific approaches for achieving this in real materials.”