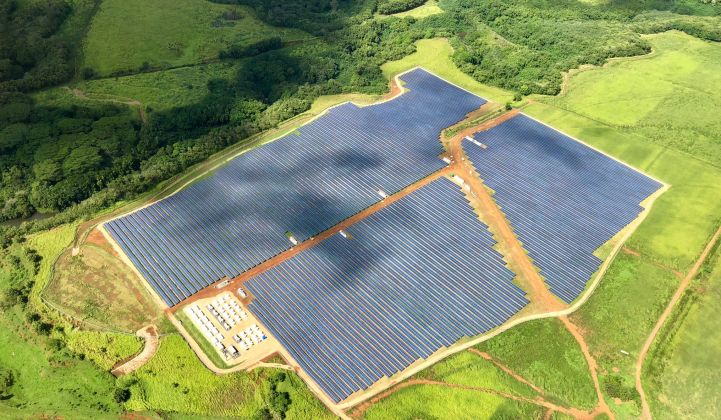 This week Hawaiian Electric Industries sent seven new solar-plus-storage contracts to state regulators. Six come in at record-low prices for the state, under 10 cents per kilowatt-hour.

The projects, which now await regulatory approval, would add 262 megawatts of solar and 1,048 megawatt-hours of storage distributed over three islands. The company said the projects will provide power “in place of volatile prices of fossil fuels,” which it quotes at about 15 cents per kilowatt-hour.

AES, Innergex, Clearway and 174 Power Global are developing the projects.

Both the pricing and the size of the contracts are significant.

If the state’s public utility commission approves the power-purchase agreement contracts, it would mean a big boost for the U.S. storage market. WoodMac currently logs 1.4 gigawatt-hours of energy storage installed in the nation, with just 75 megawatt-hours in Hawaii. According to Finn-Foley, HEI’s projects would nearly double what’s installed in the U.S. and grow Hawaii’s market exponentially. Taken together, the projects would also rank as the second-largest storage announcement ever, just behind the recently approved Moss Landing project in California.

But that’s not even the most thrilling part of this announcement for clean energy analysts.

“What’s even more notable is the range of PPA prices,” said Finn-Foley.

“With prices like these, it’s easy to understand the confidence of Hawaiian electric providers that their islands can hit 100 percent renewables ahead of the 2045 mandate,” said Finn-Foley.

Though Hawaii still relies mostly on oil for electricity, it’s gaining on its goal to reach 100 percent renewables by 2045. In a statement released before the new year, Hawaiian Electric President and CEO Alan Oshima said that in 2018 the company made significant progress in pursuit of that target.

“We have tremendous momentum as we move into 2019,” said Oshima. The contracts out this week suggest that momentum is already gaining speed.

According to HEI’s latest numbers, oil supplied between 58.52 percent and 79.02 percent of electricity in 2017, depending on the utility (HEI consists of utilities Maui Electric, Hawaii Electric Light and Hawaiian Electric). But that same year, average generation from renewables for all three utilities increased to 27 percent, up 1 percent over the previous year.

On Hawaii Island, renewable generation reached 57 percent. HEI is currently updating its numbers for 2018, but spokesperson Peter Rosegg said the volcanic eruption on Hawaii Island — which took out a 38-megawatt geothermal plant — means its renewable portfolio standard will be relatively unchanged. The company said it’s still on track to reach its RPS milestone of 30 percent by 2020.

If the projects are approved, HEI said they will also help double current reductions in oil demand, with reductions totaling about 100 million gallons below 2008 levels.

Aside from the impact the contracts could have on Hawaii’s electricity landscape, WoodMac’s head of storage research Ravi Manghani said the unique PPA structures tied to some of the contracts signal overall trends for the storage industry.

AES’s 25-year, 30-megawatt solar and 120-megawatt-hour storage PPA, for instance, uses a monthly “lump sum payment” to the developer based on net energy potential and facility availability, rather than energy delivered.

“This will certainly start to become more mainstay for solar-plus-storage PPAs going forward,” said Manghani. “This reduces the curtailment risk for the developer, which is non-trivial in a market such as Hawaii, but also provides the utility a means to operate the combined solar-plus-storage asset almost like a dispatchable traditional asset in a cost-effective way.”

Marco Mangelsdorf of Hawaii’s ProVision Solar said the announcement indicates the state is on the path to achieving dispatchability for solar-plus-storage, with projects able to provide essential grid services and grid support to the electric utility.

“The grand takeaway for me is utility solar-plus-storage is hitting price points that we’ve been hoping and waiting for a number of years to make utility-scale solar-plus-storage competitive, and then some, with other forms of power generation,” he said. “We in Hawaii are on the cutting edge.”