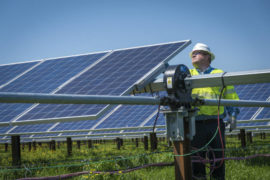 Last year, Duke Energy paid out some $6 million to North Carolina customers in solar rebates, with more than 1,300 of its customers having installed solar systems in 2018 under a 4-year, $62 million program, and the company has just opened up the window for new applications for 2019.

Solar power North CarolinaAlthough North Carolina isn’t likely to be top of mind for most people when it comes to solar energy, this state is actually second only to California when it comes to installed solar capacity, leading even some of the US states traditionally thought of as the sunniest, such as Arizona and Nevada. The state’s 4,671 megawatts of installed solar supplies just 5.44% of its electricity needs, and pales in comparison to California’s 23,186 megawatts, but the Tar Heel state still has enough solar capacity to show up near the top of the list each year.

This is due in part to the fact that back in 2007, North Carolina became the first state in the southeast to develop a Renewable Energy and Energy Efficiency Portfolio Standard (REPS), which requires “all investor-owned utilities in the state to supply 12.5% of 2020 retail electricity sales (in North Carolina) from eligible energy resources by 2021.” Add in the way that North Carolina implemented the Public Utility Regulatory Policies Act (PURPA) to make solar economically feasible in the state, as well as other strong policy and regulatory support in the state, including the 2017 passage of the Competitive Energy Solutions Plan (H.B. 589), the dropping cost of solar over the last ten years, and utility-driven solar programs, and the entire southeast — but North Carolina in particular — has been becoming fertile ground for the growth of solar energy.

The company opened up 20 more megawatts of new rooftop solar capacity on January 2nd for residential, non-residential, and nonprofit customers under the North Carolina solar rebate program. In addition, per a state Utilities Commission order, Duke Energy “will also reallocate any 2018 capacity for projects that have not been installed. That means customers who were waitlisted in 2018 with already-installed projects will be allowed to collect any available rebates. Any unconnected customers, or those that connected projects Oct. 3, 2018, or later, are eligible to apply in 2019.”

According to the Duke Energy website, the North Carolina solar rebate amounts are as follows:

The company is also looking to offer commercial, third-party-owned (TPO) solar leases to businesses in North Carolina, which opens up options for businesses to obtain commercial-scale renewable electricity without a large upfront investment.