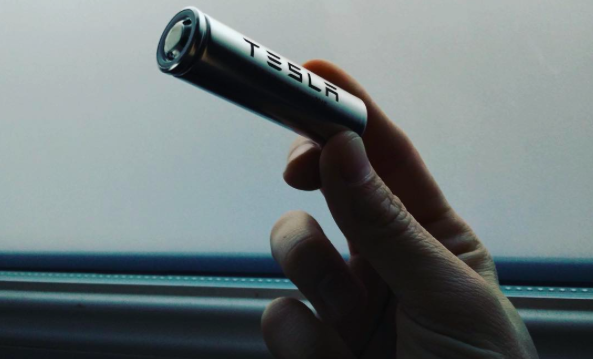 Even if the legacy automakers were to have a green epiphany and go all in on electrification, there’s another reason that they’ll struggle to catch up to the California carmaker. Tesla’s superior, cheaper battery packs give it a huge competitive advantage (just don’t call it a “moat”).

The US Advanced Battery Consortium (USABC), an industry group led by GM, Ford and Chrysler, has been working since 2013 to accelerate the development of EV battery technology. However, as Andrew Thomas points out in a recent Medium article, “Tesla’s battery is cheaper, higher capacity, more reliable, and more available than anything produced by USABC.”

“Tesla still uses commodity cylindrical cells, whereas other car manufacturers still use prismatic (Chevy Bolt) and pouch (Nissan LEAF) cells,” Thomas writes. In fact, Tesla is no longer using off-the-shelf “laptop batteries” – it has worked with partner Panasonic to develop new cells optimized for its vehicles. However, it has stuck with the strategy of assembling large numbers of small cylindrical cells into a pack.

The Chevy Bolt’s 60 kWh battery pack has 288 cells. The Nissan LEAF’s pack has 192. Tesla’s packs require many more cells – a Model 3 with a 50 kWh battery pack has 2,976 cells, and a Model S or X with a 100 kWh pack requires a whopping 8,256. Obviously the smaller cells are cheaper, but it stands to reason that it must be more difficult, and hence costlier, to assemble them into a pack.

Therein lies a mystery – Tesla is widely believed to have the lowest battery cost in the industry. But how does it manage to assemble all those tiny cells into a pack economically? As far as Thomas has been able to tell, no one outside the company knows.

“I can’t find a picture or video of the robots that assemble the cells into packs,” Thomas writes. “These robots would need to wire bond the batteries to the bus bars. For every battery cell there will be 2 wire bonds (positive and negative). So it’s a lot of work. The robots need to be very fast, otherwise Tesla would need a lot of them to mass produce battery packs and it would drive up their costs.”

One clue might be found in a 2017 Wired article by a former employee, who reports that the Model S and X battery packs are assembled on a “secret” second floor at Tesla’s Fremont factory.

Another clue comes from something Elon Musk said on the Q3 2017 earnings call: “We are pushing robots to the limit in terms of the speed that they can operate at, and asking our suppliers to make robots go way faster, and they are shocked because nobody has ever asked them that question. It’s like if you can see the robot move, it’s too slow. We should be caring about air friction like things moving so fast. You should need a strobe light to see it.”

So where are these speed demons? “There are some pictures from the Gigafactory, where the Model 3 battery pack is manufactured, but none where I see a robot wire bonding the battery cells,” writes Thomas. “I don’t see any machines that are close to moving so fast you would need a strobe light to see.”

Could those robots be doing their dizzying dance somewhere on the secret second floor in Fremont? And possibly in Nevada as well? Recent visitors from the media have found that the section of the Gigafactory where the cells are made is under heavy security – no photos or videos allowed – and also appears to be one of the most highly automated sections of the plant.

However, Tesla is pulling it off, there’s little doubt that its batteries are cheaper, and Thomas believes things will stay that way. “Even if incumbents decided to use cylindrical cells, it will be challenging to engineer a manufacturing process that is economical, and not time consuming. Packaging cylindrical cells is a process Tesla has been refining for over 10 years.”

Tesla’s industry-leading battery cost also has implications beyond the auto industry. Elon Musk has said in the past that the company’s stationary storage business could someday be bigger than its vehicles. Enrique Dans writes in Forbes that “battery manufacturing is set to become one of the most important industries on the planet, and whoever dominates it will occupy a privileged place in many ways, supplying a wide variety of industries from vehicles to household goods, as well of course as electricity generation.”

“Twelve years ago, when he described his company’s ‘secret master plan,’ Elon Musk spoke not only about making cheaper electric cars, but included a third point, which was providing the means to generate zero-emissions electricity, a point that many pundits missed amid the hullaballoo over Tesla cars,” Dans continues. “Today, with the company in the black, it turns out that battery production has been the key to its strategy: the reason why auto industry veterans like Bob Lutz could not understand Tesla’s road map was because Tesla isn’t a car company, it’s a battery company.”

“Tesla isn’t a car manufacturer competing with other automobile manufacturers…Tesla’s vehicles are consumers of the company’s main product: batteries,” Dans concludes. “Rethink your models and your spreadsheets: stop seeing Tesla as a carmaker and start understanding that the company has much more ambitious plans for the future.”

Dans foresees the battery industry growing ever more important, and eventually overtaking an auto industry faced with shrinking demand for private cars. If such a future comes to pass, we all know the name of the company most likely to benefit. As Andrew Thomas puts it: “Big Auto is screwed.”