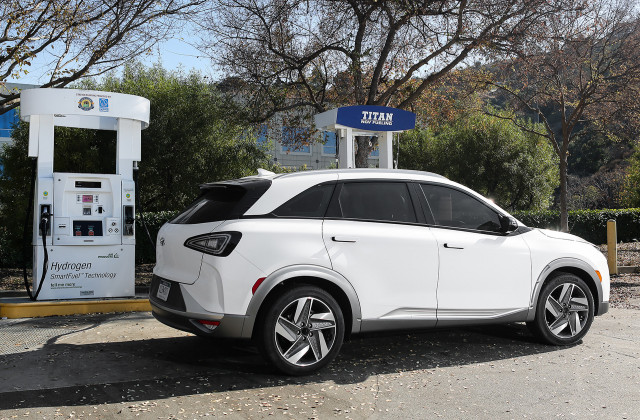 Hyundai last week made the first U.S. delivery of its Nexo fuel-cell vehicle—to a customer in Southern California.

Although the customer, Todd Hochrad, picked the Nexo up from a dealership in Van Nuys, he lives in Ventura, which could place him about equidistant from hydrogen fueling stations in Thousand Oaks and Santa Barbara.

The Nexo enters the market as a niche vehicle among niche vehicles. Hyundai is limiting deliveries of this, the only SUV among hydrogen fuel-cell vehicles, to Southern California, but other areas of the state will soon follow. According to the California Fuel Cell Partnership and its station map, there are currently 24 stations up and running in Southern California.

With the first delivery, Hyundai has firmed up lease terms for the Nexo: The base 2019 Hyundai Nexo Blue can be leased for $399 a month, and the Nexo Limited costs $449 a month. Both are 36-month leases.

As we reported last month, the Nexo Blue will cost $59,345, and the Nexo Limited will cost $62,845. Hyundai has since clarified that those purchasing the Nexo will receive hydrogen fueling cards, to be used in the first three years of ownership, with a combined value of $13,000.

Most deliveries of the Nexo, Hyundai has agreed, will likely still be through leases. Toyota officially also offers its Mirai for purchase, but a Toyota spokesman recently confirmed to Green Car Reports that leases have comprised 95 to 99 percent of Mirai deliveries.

The Hyundai Nexo Blue is EPA-rated at 380 miles of range—115 miles more than its Tucson Fuel Cell predecessor—but opting for the loaded Nexo Limited costs some range, lowering the estimate to 354 miles. That puts the Nexo much better off for range than the 312-mile Mirai and, depending on which version you’re opting for, potentially better than the 366-mile Honda Clarity Fuel Cell.

The federal government, in its official vehicle fuel efficiency pages, outlines some of the differences in numbers between these vehicles in detail. It’s worth pointing out, however, that the government’s annual fuel costs are wildly optimistic, at a subsidy-dependent $5.55 per kilogram. Our last retail encounter with a hydrogen refueling station, in October at one of this customer’s next-closest stations, in Woodland Hills, was dispensing it for $17.49/kg.