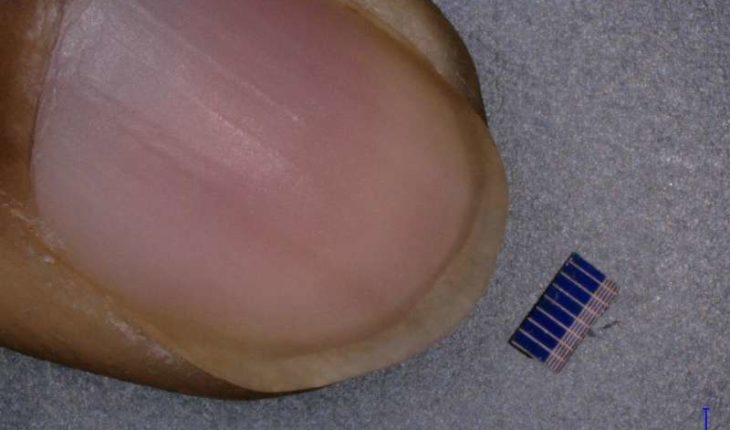 Clothing embedded with tiny solar cells the size of a flea will allow wearers to generate electricity on the move and charge items like mobile phones and smartwatches.

Nottingham Trent University has developed a way to embed miniaturized solar cells into yarn that can then be knitted and woven into textiles. The technology has been tested and proven to charge a mobile phone and a Fitbit.

The cells are encapsulated in a resin which allows the textile fabric to be washed and worn like any other form of clothing.

Measuring only three millimeters in length and 1.5 millimeters in width, the cells are almost invisible to the naked eye and cannot be felt by the wearer.

For all intents and purposes, garments appear exactly the same as any other form of clothing despite having the capability to generate electricity.

Up to 200 miniaturised cells can generate 2.5-10 volts and up to 80 miliwatts in power. The university’s Advanced Textiles Research Group made a proof of concept textile of 5cm by 5cm size with 200 cells.

This proved powerful enough to charge a mobile phone and a Fitbit. Researchers say if 2,000 solar cells were incorporated into a textile it would generate enough power to charge a smart phone.

Of course, in the end its mostly bbb-bb-b-bûllsnot:

1. The teeny-tiny solar cells need to be connected together quite specifically in series-parallel to generate power that is USEFUL for recharging one’s smartphone.
2. The little things need to be ‘normal’ oriented to the light source.
3. The specific output … 89 watts per square meter (thank you Excel) is only attained when the cells are illuminated by full Noon sunlight (8.9% efficiency with 1,000 W/m² illumination).

It needs to be remembered that if one were — per the suggestion of the article — to have these things woven into the yarn of a sweater (hoodies, jacket, windbreaker…), that ONLY the cells on top of one’s shoulders would be oriented normal to noon illumination. The rest would be pointed the wrong way. If the wearer were prone (laying down), then again, only half point the right way. The rest are shadowed by the body.

And of course the real-world, “how then do these exquisitely dainty cells, woven into clothing, ‘survive’ being repeatedly washed in washing machines and tumble-dried in home dryers?” All those precious connections, tumbled along with other soggy clothing, mmm…. mmm… nope, I can’t see ‘em surviving. I can’t even see a “cell phone recharging cable” surviving. Let alone the tens of thousands of connections.