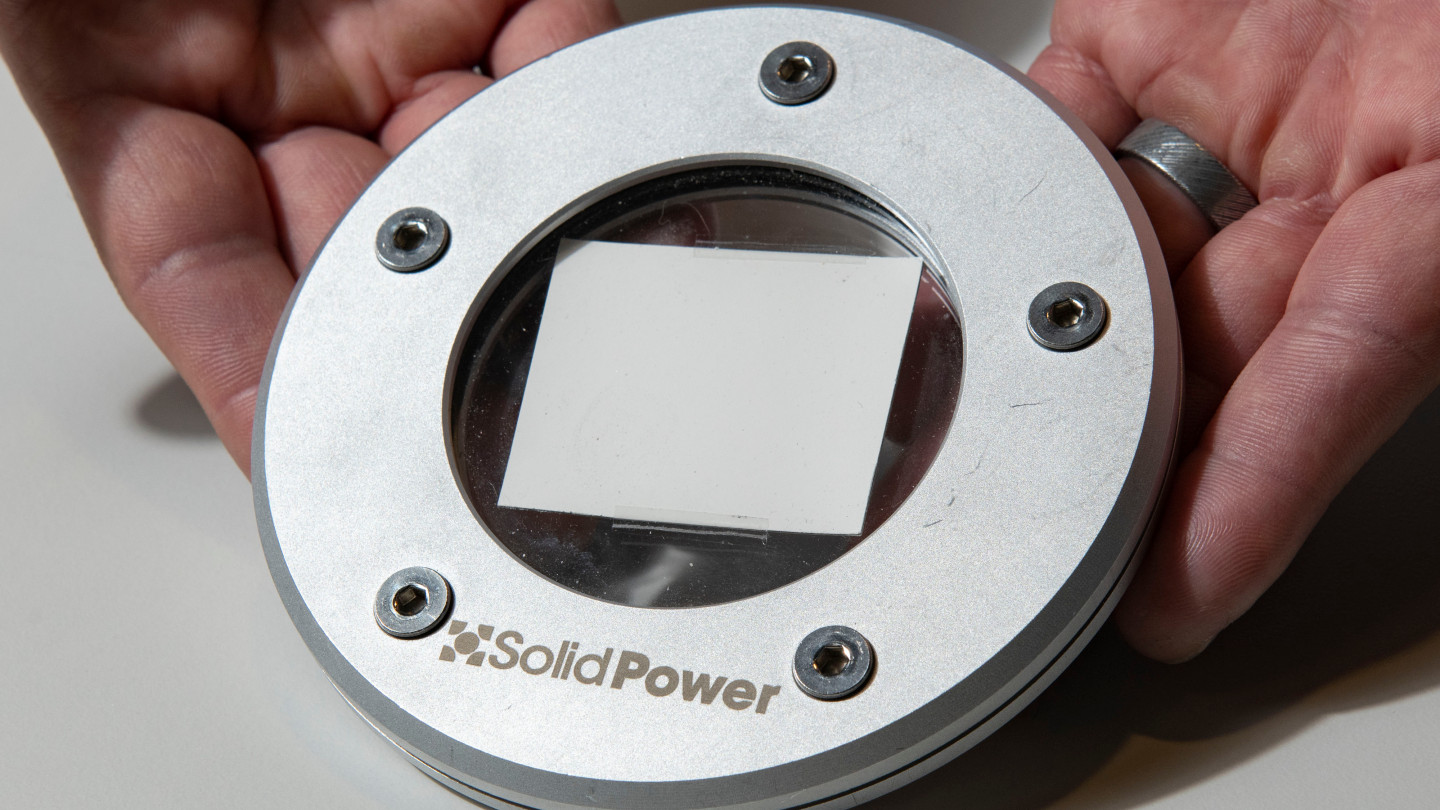 Doug Campbell wants to do a solid for the auto industry — a solid-state battery, that is. The gizmo could make electric vehicles less expensive and go farther on a single charge.

Campbell’s company, Solid Power, is building in Louisville the largest solid-state battery factory in the U.S. after raising $20 million in September in its first round of venture-capital financing.

Though the nation’s biggest solid-state production facility, its 12-megawatt-hour capacity is relatively small. Elon Musk’s Tesla battery factory in Sparks, Nevada, has a 1,000-MWh capacity, making it a so-called gigafactory.

“Batteries are ripe for hype”

The next better battery has become a holy grail, with many companies having failed in their quest. Axion, Alevo, Valence — all bankrupt, just to name a few.

“Batteries are ripe for hype,” said Campbell, Solid Power’s CEO and a co-founder. “There is huge potential, but batteries are freakin’ hard. It is capital intensive, and it doesn’t happen overnight.”

Still, cracking the code for the next battery could bring big returns. Bloomberg New Energy Finance projects that by 2040, EVs will account for 55 percent of all new-car sales.

“Solid-state batteries are the next frontier in our pursuit of light, fast-charging and, hopefully, cheaper batteries for electric transportation, from next-generation electric vehicles to drones or even electric airplanes,” Ravi Manghani, energy storage director at consultant Wood Mackenzie Power & Renewables, wrote in an email to The Colorado Sun.

“There will be continued interest in investing in solid-state technologies, either through organic R&D or venture investments,” Manghani wrote. “Now, of course, not all investments are going to bear fruit, but it’s an important area for investment, nonetheless.”

More than $500 million was invested in solid-state battery ventures in 2018, more than twice as much as all previous years, according to Wood Mackenzie.

The most widely used battery is the lithium-ion battery, like the ones produced by Tesla. The performance of these batteries has improved, and the price has dropped 85 percent since 2010 to about $176 per KWh, according to Bloomberg New Energy Finance.

Still, future performance gains are projected to slow, and lithium-ion batteries come with drawbacks, especially their tendency to catch fire.

A battery has three key elements: two electrodes — an anode and a cathode — and an electrolyte between them. The electrons pass from the anode to the cathode through the electrolyte.

Lithium-ion batteries use a liquid electrolyte, which is efficient in conducting electrons between the electrodes, but it’s flammable. (Think Samsung Galaxy mobile phones catching fire.) The batteries also require additional packaging for safety.

The solid-state battery promises to do away with the fire risk by replacing the liquid lithium electrolyte with a solid one. This would allow for a smaller battery with higher-energy density and a longer lifespan. By some estimates, a solid-state battery could double the range of an EV.

The problem has been that electrons have more trouble passing through a solid electrolyte, making the battery less efficient. This is the challenge that solid-state battery companies are working to overcome.

Solid Power is getting backing from automakers BMW, Samsung and Hyundai. A rival startup, Ionic Materials, based in Woburn, Massachusetts, has among its backers Renault, Nissan and Mitsubishi. In February, it raised $65 million in its third round of financing.

In May, Japanese manufacturers — including Toyota, Nissan, Honda and Panasonic — announced they were forming, with Japanese government financial backing, a consortium to develop a solid-state battery.

Volkswagen in June said it was making a $100 million investment in solid-state battery company QuantumScape, a startup spun out of Stanford University.

“There is definitely a race afoot, but this is not a zero-sum game,” Campbell said. “Regardless of whoever does it first, it doesn’t mean everyone else packs their bags and goes home.”

Still, the pitfalls in the battery game can be treacherous. General Motors pulled a multimillion dollar contract from Envia Systems in 2013 after the fledgling maker of solid-state batteries failed to deliver on performance goals, leaving the company bankrupt.

Dyson Ltd., a manufacturer of vacuum cleaners, is looking to make an EV and acquired Michigan-based solid-state battery company Sakti3 in 2015 for $90 million only to write off the investment in September.

“Dyson got caught up in the hype,” Campbell said. “As for the Envia debacle, GM did not do their due diligence.”

One of Solid Power’s backers is A123 Systems, which went bankrupt in 2012 trying to make an auto battery. It was bought by the Chinese Wanxiang Group and was revived as a maker of stationary storage batteries.

To guard against the fickle machinations of the battery market, Campbell said Solid Power has played a low-profile, conservative game.

“We’re a little more pragmatic and of humble nature than our predecessors,” Campbell said. “We don’t make a lot of noise.”

Solid Power started in 2012 with an innovation by University of Colorado mechanical engineering professors Sehee Lee and Conrad Stoldt, who Robinson said have become partners in Solid Power. Their invention was a more efficient cathode.

That cathode has been twinned with solid lithium-sulfur electrolyte material licensed from the U.S. Department of Energy’s Oak Ridge National Laboratory in Tennessee. “Our electrolyte has the best blend of performance and manufacturability,” Campbell said.

Solid Power has been building and proving its batteries by hand.

“The next stage is achieving production-scale, high-quality, automated production,” Campbell said. The factory should begin making batteries in early 2019.

The goal in designing the manufacturing process was to keep it as close to existing manufacturing as possible — with no exotic or unique equipment — so that the Solid Power product can be made in any existing battery plant.

The aim is to bring the cost of a battery to less than $100 per KWh, Campbell said.

The company is not planning a gigafactory à la Tesla. “It is unlikely we will be the manufacturer for the transportation market,” Robinson said. Possible scenarios include licensing the technology to an automaker or a partial acquisition.

In its efforts to “de-risk” the development of the battery and the company, Solid Power has “partnered early and often with deep-pocket partners,” Robinson said.

“Solid Power isn’t the only startup vying for longer-term growth through licensing or partnership arrangement,” Manghani said. “Setting up a mass-scale battery gigafactory is a massive undertaking. Solid Power’s intellectual property is very likely the chemistry itself, whereas the battery bigwigs have, in a lot of ways, already mastered the art of manufacturing at scale. The fastest way to grow and bring its products to the market will be through such arrangements.”