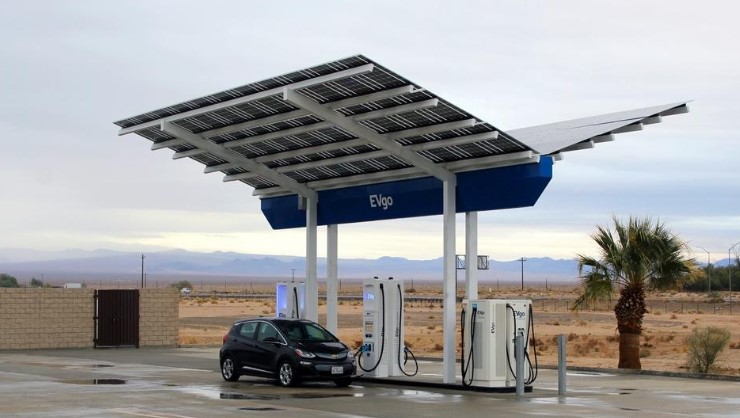 Las Vegas-bound drivers with electric vehicles now have more charging choices available to them in Baker.

EVgo, which operates more than 1,000 charging stations across the country, has added fast, super-fast, and ultra-fast charging units to its station in Baker. The station, open to the public, is located next to the giant thermometer.

The additions were made because of an increase in electric car drivers and “Baker is a key stopping point between Los Angeles and Las Vegas,” said Jonathan Levy, the Vice President of Strategic Initiatives at EVgo. Baker is roughly 90 miles from Victorville.

For EVgo members, the cost to charge their vehicles is 15 cents a minute. Non-members pay 20 cents a minute. Charging a car can take as long as 12 hours or as little as 30 minutes, depending on the size of the battery and the speed of the charging unit.

A second charging station located near the Shell station on Baker Boulevard supports only Tesla vehicles. The EVgo station is capable of servicing all electric vehicles with CCS and CHAdeMO standards.

“All EVgo fast chargers have both CHAdeMO and CCS connectors to service any electric vehicle capable of fast charging, such as the Nissan Leaf, BMW i3, Chevy Bolt and more,” said Levy.

The EVgo charging station, powered by a solar panel shade canopy, stores energy in a BMW second-life battery storage system. “These batteries help maximize the amount of solar energy the chargers can use and help mitigate peak demand on the grid,” Levy said.

EVgo CEO Cathy Zoi said, “By increasing the number of chargers and offering a variety of charging speeds, we are giving EV drivers the chance at their fastest possible charge between Las Vegas and Los Angeles.”

The new 350 kW EVgo charger at this station can distribute power faster than any electric vehicle today can handle, but the company says it is planning for faster charging electric vehicles in the future. A typical electric vehicle is capable of limiting charging speeds to prevent damage to batteries.

Electric vehicles that have the correct charging adapter will be able to charge at all of the station’s charging units.