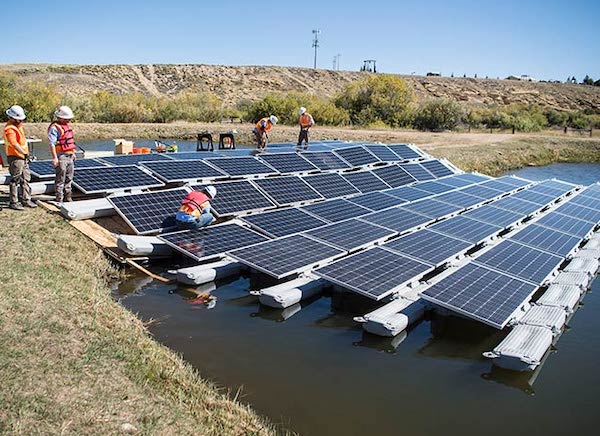 The idea of floating solar panels out on water seems to make sense, right? Well, maybe. Waterborne PV adds another wrinkle to the task of maintaining and repairing solar panels. Finding suitable bodies of water is a whole ‘nother can of worms. Nevertheless, other countries are shaking the floating solar panel tree and now the US Department of Energy wants the US to play catch-up.

The new study — the first of its kind in the US — comes from the Energy Department’s National Renewable Energy Laboratory in Colorado.

They answer the suitable site question right off the bat:

…researchers estimate that installing floating solar photovoltaics on the more than 24,000 man-made U.S. reservoirs could generate about 10 percent of the nation’s annual electricity production.

…researchers estimate that installing floating solar photovoltaics on the more than 24,000 man-made U.S. reservoirs could generate about 10 percent of the nation’s annual electricity production.

The new study, which you can find in the American Chemical Society’s Environmental Science & Technology journal, looks at bodies of water with the right conditions for covering, at least partially, with flotillas of PV panels. Not all of these would be suitable, say, from a wildlife conservation perspective.

However, the study only looked at human-made bodies of water, which ups the odds of using many of the sites without creating new headaches for conservationists.

Floating Solar Panels By The Numbers

According to the NREL study, a good 24,419 human-made bodies of water in the US would be suitable for floating solar panels.

The winning sites were selected partly based on the idea that in some areas, the high cost of farmland pushes up the cost of installing a land-based solar array.

That’s actually a major selling point. It is getting more difficult to find new sites for conventional solar arrays in areas from an economic perspective due to the high cost of land acquisition, let alone overcoming any conservation or environmental obstacles .

To buttress its argument, NREL notes that in many of the identified areas, water scarcity is an issue and evaporation rates are high. If you can reduce the evaporation rate by covering all or part of a water body with floating solar panels, you get a significant co-benefit.

As another side benefit, floating solar panels could also reduce algae growth in ponds needed for irrigation or livestock.

The study also considered electricity rates as a motivation to install floating solar panels in some areas. As a related matter, putting solar arrays on hydropower reservoirs would help utilities get more use out of their existing transmission systems. That goes double for hydropower operations with pumped energy storage.

The figure of 10% of the nation’s electricity generation is actually a conservative estimate. The 24,419 suitable water bodies represent just 27% of all human-made water bodies in the US, and the 10% estimate is based on taking just a 27% slice of those 24,419 water bodies.

I know, right? The number 27 pops up twice, so it’s confusing. Here, let NREL clean things up a bit (break added for readability):

Many of these eligible bodies of water are in water-stressed areas with high land acquisition costs and high electricity prices, suggesting multiple benefits of FPV technologies.

Taking NREL’s site selection criteria into consideration, the benefits would not be spread evenly throughout the US. States like Pennsylvania and Ohio barely make the cut, while Florida, California, and the southwest are practically swimming in floating PV potential.

What’s Taking You So Long?

That’s a good question, considering the vast water resources of the US. Currently the US has only seven floating solar arrays in operation.

NREL actually seems a little peeved that the US is not already a floating solar powerhouse. Here’s a sample from the agency’s press release announcing the new study:

While the United States was the first to demonstrate floating PV panels—with the first installation occurring 10 years ago on pontoons on an irrigation pond in Napa Valley, California—the idea has not received widespread national acceptance…Floating PV sites are being deployed more overseas, however, with more than 100 sites as of the end of last year. Japan, for example, is home to 56 of the 70 largest floating PV installations.

Ouch! If you have some thoughts about that, drop us a note in the comment thread.

Meanwhile, it’s worth noting that NREL did not have a funding partner for the new study. They performed the analysis pretty much under their own steam through an internal funding stream from the Laboratory Directed Research and Development program.

The Department of Energy affectionately refers to LDRD as its “engine of discovery.”

The LDRD funding stream was established back in 1991, as a way to formalize routine Congressional authorization for federal laboratories to engage in “creative and innovative work that serves to maintain their vitality in science and technology disciplines relevant to DOE and national security missions” — in other words, to stay relevant.

It enables high risk R&D at the Department’s laboratories in areas of potential value to national R&D programs.

Its flexibility allows the laboratories to assemble experts from different fields into teams whose collaboration uncovers synergies and multidisciplinary solutions not otherwise evident without the freedom to reach across traditional technical boundaries.

…LDRD serves as a proving ground for advanced R&D concepts that are often subsequently pursued by DOE programs and, at the same time, helps the Government identify more creative approaches to fulfilling future mission needs.

…LDRD contributes to an environment at the laboratories that encourages and supports creativity and that is poised to respond immediately to DOE mission challenges as they arise.

…LDRD helps the laboratories maintain and develop scientific and engineering capabilities in areas of strategic importance to the nation.

Among the most valuable aspects of the LDRD program is its role as an excellent professional development tool.

The LDRD program is instrumental in the laboratories’ ability to attract promising young scientists and engineers, thus providing the basis for continually refreshing the laboratory research staff, as well as for the education and training of the next generation of scientists.

There’s more — much more. All this is by way of saying that the new floating solar panel study is not just significant, it’s LDRD-level significant.

CleanTechnica is reaching out to the Solar Energy Industries Association for some boots-on-the-ground insights about the US floating solar sector, namely, what’s taking so long?

There is a lot of catching up to do. Globally, floating solar capacity is already easing into gigawatt territory and other countries are gearing up to jump on the floating PV bandwagon.

In fact, last October the World Bank issued a new report that touted 400 gigawatts in global floating solar potential. The agency was particularly excited about the potential for floating solar to ramp up electricity generation at existing hydropower sites.

The City of Los Angeles recently approved a feasibility study for a floating PV array on its Van Norman reservoir, so stay tuned for more on that.