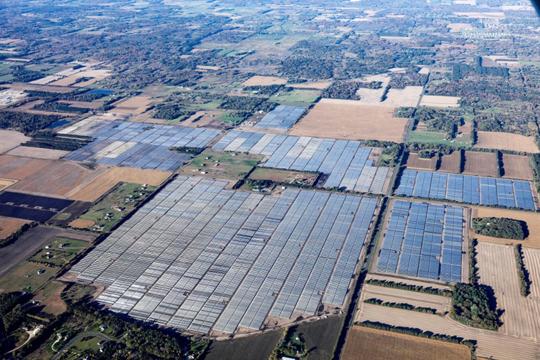 After milking cows for nearly half a century, Ken Wunderlin sold his herd last summer.

He and his son still raise beef cattle on their 500-acre farm in the rolling hills of southwestern Wisconsin, but next year instead of corn and soybeans, Wunderlin expects to see solar panels in the field outside his front window.

Wunderlin is one of about two dozen landowners who’ve agreed to host a proposed 300-megawatt solar farm that, if approved, would be one of the largest in the nation.

The income would be better than he could get renting out the land, and unlike commodity prices, it’s guaranteed. Wunderlin also sees it as a way to be a part of a new energy economy.

“I’m a firm believer in the science on global warming,” he said. “We need to be taking steps to get away from coal-fired power … this is my small opportunity to be a participant.”

But not everyone in Iowa County is welcoming the development.

Richard Jinkins lives just east of Wunderlin’s land on a 400-acre farm his family homesteaded in 1848.

Jinkins, along with Alan Jewell and another nearby farmer, are leading the charge against the project as it goes through the permitting process with the Wisconsin Public Service Commission.

They worry solar panels will destroy the scenic beauty, take valuable farmland out of production for generations and cause the county’s population — just 23,687 people — to dwindle.

“In the best case (it’s) going to make a solar panel wasteland where nobody’s going to live,” said Jinkins, a computer programmer who also raises cash crops. “It’s not going to be the Driftless area. It’s going to be the utility district of southwest Wisconsin.”

A joint venture of Chicago-based Invenergy and two Wisconsin utilities, the Badger Hollow Solar Farm would include up to 1.2 million solar panels sprawling across western Iowa County, generating enough electricity to power more than 70,000 homes.

Renewable energy advocates have hailed it as a way for utilities to generate cheap, clean electricity within the state while providing some $1.8 million a year in rents for hard-pressed farmers like Wunderlin.

Opponents, including a family whose home will be bordered on three sides by solar panels, have raised concerns about glare and the noise from 3,150 motors used to track the sun, as well as what will happen if the panels break and why there’s no plan in place for restoring the land once the project is done.

And consumer protection advocates worry about a lack of oversight for the project, which has an estimated price tag of over $360 million and is likely a harbinger for more utility-scale solar farms.

Jinkins says he’s not against solar energy. But he would rather see smaller projects owned by individual residents.

But groups seeking to fight climate change say large-scale utility projects like Badger Hollow are key to ending fossil fuel use. It would take about 60,000 average-size residential systems to make the same impact, and under the current utility structure, it would be far less cost-efficient.

“Some people have this notion that we can supply ourselves entirely with rooftop solar,” Vickerman said. “That is patently ridiculous.”

Biggest in the Midwest

With a footprint of nearly 2,700 acres — an area bigger than Dodgeville, the county seat — Badger Hollow would bring solar power on a scale never seen in Wisconsin.

There are only six larger solar installations in the country, all in California or Nevada.

It will be more than a hundred times the size of the next-largest solar farm in the state, a 2.75-megawatt facility in Chippewa County. The solar system on the Epic Systems campus in Verona is about 2.2 megawatts.

And while it is the first of its type, it’s also not the last.

Badger Hollow is one of two utility-scale solar farms currently seeking approval from the Public Service Commission. NextEra Energy has applied to build a 150-megawatt project known as Two Creeks near the shore of Lake Michigan in Manitowoc and Kewaunee counties.

There are another 30 proposed solar projects in Wisconsin under review by the Midcontinent Independent System Operator, the operator of the Midwestern power grid. The smallest is 50 megawatts; 22 are between 100 and 400 megawatts.

Under the proposal before the PSC, Badger Hollow is considered an independent power producer, meaning the owners would sell the electricity generated to the wholesale market rather than recouping their investment directly from ratepayers.

That exempts it from the needs analysis that would be required if it were proposed by a regulated utility.

But Madison Gas & Electric and WE Energies have agreed to buy half the solar panels once they are installed, a transaction the PSC is considering separately.

If the utilities themselves applied for permits, the commission would have to evaluate the need, economics and engineering — alongside alternatives — rather than simply determining where to put the solar panels.

The utilities say the acquisition of Badger Hollow, along with the Two Creeks project, is an opportunity to “take advantage of a cost-effective and zero-emissions solution” to their capacity needs with “little impact” on customer bills. They say the $390 million purchase of the two projects will save customers more than $180 million in the long run.

The two-step application process has prompted concerns from the Citizens Utility Board, which represents ratepayer interests.

CUB says handling the two requests in “lock-step” casts doubt on whether the commission can carry out its duty. The group warns the two-step permitting model could be used to undermine the comprehensive analysis required by state law.

“These cases are all joined at the hip,” said CUB executive director Tom Content. “The traditional process … actually requires a more hefty review.”