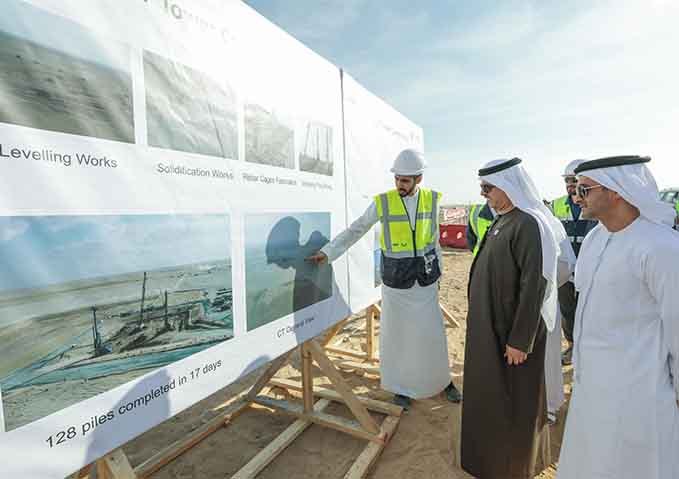 The Dubai Electricity and Water Authority (DEWA) said that construction work on the fourth phase of the Mohammed bin Rashid Al Maktoum Solar Park has advanced further with the completion of 128 pillars of the project’s solar tower.

This is part of DEWA’s continuous efforts to accelerate Dubai’s transformation into a global clean and renewable energy hub and its shift towards solar energy. The fourth phase of the Park is the largest single-site investment project in Concentrated Solar Power (CSP) in the world based on the Independent Power Producer (IPP) model.

HE Saeed Mohammed Al Tayer, MD & CEO of DEWA announced the latest updates on the progress of the project during a visit to review the construction work on the Park, one of the world’s largest single-site solar parks. Featuring a total investment of AED50m, the Park will reach a total capacity of 5,000 megawatts (MW) by 2030.

Al Tayer was accompanied during his visit by Waleed Salman, Executive Vice President of Business Development and Excellence at DEWA; Jamal Shaheen Al Hammadi, Vice President of Clean Energy & Diversification at DEWA; and a number of DEWA officials.

Al Tayer was briefed on the progress of construction work by Abdul Hamid Al Muhaidib, Executive Managing Director of Noor Energy 1, a venture formed through a partnership between DEWA, Saudi Arabia’s ACWA Power and China’s Silk Road Fund to build the fourth phase of the Park.

The fourth phase of the solar Park will use three technologies to produce 950MW of clean energy, 600MW from a parabolic basin complex, 100MW from a solar tower, and 250MW will be generated from photovoltaic panels.