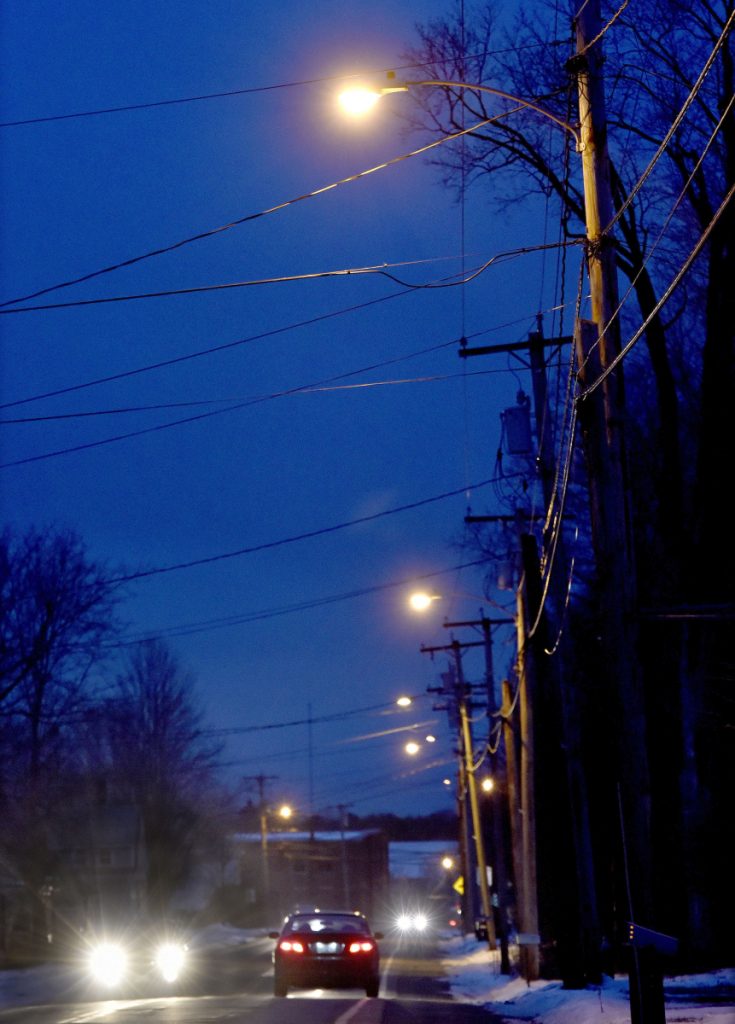 New streetlights are expected to line Vassalboro’s roads in the coming months, replacing existing lamps, installed as early as 1921, with energy-efficient LED fixtures.

Unlike other towns in Maine doing so, though, Vassalboro has decided to go through Central Maine Power Co. for the conversion project in order to avoid maintenance responsibilities and costs.

In November, selectmen unanimously voted to pursue a contract with Central Maine Power Co. to replace the lights at no cost and enter into a 15-year lease for the fixtures. The town is expected to save $4,417.91 annually as a result.

“CMP said they will likely not be able to do anything for us until the second quarter of next calendar year, so April or May,” Town Manager Mary Sabins said. “But (the CMP representative) didn’t nail down an exact date or time. She said they’d be in contact.”

Had the Board of Selectmen opted to put the project out to bid, the town potentially could have saved more money in the long term. However, Vassalboro would face an upfront expense of $8,780 — the combined cost of buying the current 111 lights from the utility company plus the amount of tax revenue Vassalboro would lose as a result. It also would have to buy the new light-emitting diode fixtures and pay a contractor to install them.

Working with CMP allows the town to avoid these costs, though it still would pay the company to lease the LEDs for a decade and a half. Vassalboro CMP account manager Tammy Pierce informed Sabins in a Nov. 5 email that “there is no cost to the Town to install these LED lights and because the average age of the existing lights is greater than 15 years, (the) cost to remove (them) would be $0.”

CMP also would continue to pay the town taxes on the lights. Lauchlin Titus, chairman of the selectmen, noted that the payback period on the LEDs would range from five to seven years.

“CMP … makes the most sense to me,” Selectman Robert Browne said at a Nov. 15 meeting. “We’d still have some savings. We don’t have to maintain (the lights). I don’t know if we’d have more savings by putting it out (to bid), but we are saving money. We still get taxes on it. To my mind, I like the CMP option.”

The chief concern of the selectmen was that if Vassalboro contracted with a different company for the LED installation, the town would be responsible for maintaining the lights, which it is not equipped to do. Vassalboro would have to hire a licensed electrician whenever a light was in need of repair. The arrangement with CMP includes repair and servicing.

“To my mind, my concern all along with this has been I don’t want us maintaining that,” Browne said. “I don’t see Eugene (Field, public works foreman,) being up on a ladder trying to fix a light. That’s not something that I want to see.”

Regardless of what company installed the new lights, switching from high-pressure sodium lights to LEDs will save Vassalboro money on energy. CMP spokesperson Catharine Hartnett said LEDs “offer 30 percent to 50 percent energy savings as compared to conventional high-pressure sodium streetlights.”

A quote from Pierce notes that Vassalboro’s current energy supply costs are $4,167 annually and would be reduced to about $1,409 a year with the transition to LEDs. These rates are calculated based on energy consumption. The current delivery and lease fees Vassalboro pays CMP are $13,939 per year, and with the LEDs, that number would decrease to $12,279, according to Pierce. In total, the town’s annual streetlight expenses would drop from $18,107 to about $13,698.

Hartnett declined to comment on how many towns and cities are working with CMP on streetlight conversion projects, noting more vaguely that “many of our municipal partners (are) considering entering into new 15-year agreements as well as purchasing streetlights.”

Sabins said that in her communications with the company about LED installation quotes, a representative expressed that “CMP is being inundated with these types of requests.”

The company first began installing LEDs in 2017, according to Hartnett. Vassalboro has been looking to replace its streetlights with more energy-efficient fixtures for at least two years.

“When we first looked at it, CMP was not even in the market, and now CMP is coming around because there’s a lot of large municipalities that are making that switch,” Titus said. “Now CMP’s like, ‘Oh, wait a minute, maybe we’ll play.’”

The town of Falmouth — and its manager, Nathan Poore — galvanized the state’s shift towards LED street lighting several years ago. A number of municipalities, including Portland, South Portland, Biddeford and Rockland, have followed suit, and some have opted to pursue fixtures that also provide a free Wi-Fi signal. This also echoes a movement across the country.

In 2013, state law changed to allow municipalities to purchase light fixtures on utility company-owned poles so that more energy-efficient lighting could be installed. Poore had lobbied for this change for over a decade.

Recently, Augusta officials indicated that they are interested in switching the city’s streetlights to LEDs, although they would work with New Hampshire’s Affinity LED Lighting on the project and buy out the existing lamps from CMP. This decision was discussed in November at a City Council meeting. Gardiner also moved to upgrade its street lighting in the past month, and has indicated that it will not be working with CMP for the conversion either.

Chelsea and Hallowell are considering the shift toward the more energy-efficient options as well, but they are waiting for quotes from CMP and other companies that could do the work, according to local officials.

Earlier this year, the town of Fairfield found out that it had been paying CMP for nearly 20 streetlights that did not exist anymore. Officials were made aware of the problem after a town-led inventory of the lights, and CMP agreed to refund over $14,000 for past billing as a result.

Sabins said she does not expect Vassalboro to come across a similar problem as the lights are upgraded to LEDs, and that the town has not done an inventory of its streetlights recently.

“I think at this point we don’t need to,” she said.