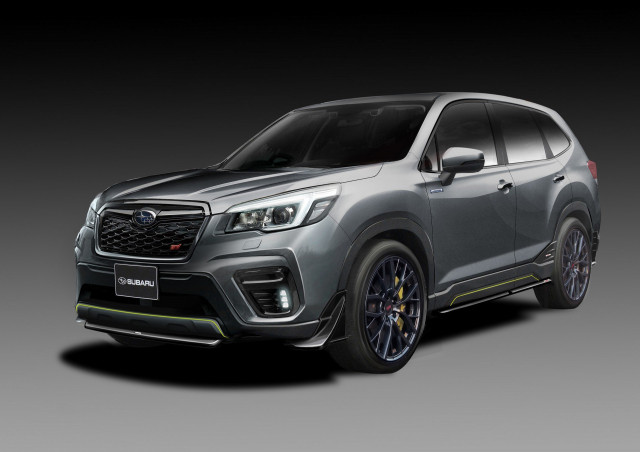 Subaru’s STI performance skunkworks has helped enable some very fast, exciting versions of the Japanese automaker’s vehicles. And with its 2019 Crosstrek Hybrid, Subaru has shown it can engineer a full hybrid—a plug-in with a 17-miles range rating.

However, the Forester STI Concept hybrid shown this week for the Tokyo Auto Salon doesn’t show the potential of either of these impressive extremes. Although this sportier-looking version of the Forester could mean more to its home Japanese market, for the U.S. it seems to serve the mission of simply teasing that both a Forester Hybrid and a sportier Subaru STI could be on the way eventually.

The aero body kit, special wheels, and Fighter Gray hue—and yes, even the STI badge—are a little bit of a red herring. The Forester has a 143-horsepower, 2.0-liter flat-4 engine and a 13-hp electric motor that captures energy in coasting and deceleration, assists during acceleration, and can at least theoretically move the vehicle, at low speed and very short distances, solely on electric power.

According to Subaru’s director of corporate communications, Dominick Infante, the Forester and Crosstrek hybrids that are sold in other markets, bearing the e-Boxer badge, are mild hybrids, similar to the old Crosstrek Hybrid that was discontinued in the U.S. after the 2016 model year. “Subaru has no intention of bringing back a mild hybrid to the U.S. market,” he told Green Car Reports.

What that does, thankfully, leave room for in the U.S. market is a Forester Hybrid. Subaru went through the costly development process of adapting Toyota’s hybrid system, from the Camry and RAV4, borrowing some pieces from the Prius Prime, and then making it work with its mechanical all-wheel drive system.

At the launch of the Crosstrek Hybrid, company officials hinted that this new hybrid system was engineered to fit with their core all-wheel-drive philosophy, and to fit into the platform that’s shared across nearly the entire Subaru lineup. With a 2019 Toyota RAV4 Hybrid arriving soon and a Honda CR-V Hybrid expected next year, a Subaru Forester Hybrid, while unannounced and unconfirmed, would fit right in.