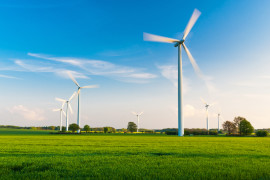 Renewable energy is expected to cover approximately 38% of German electricity consumption this year, an increase of 2% over 2017, according to the latest figures published on Thursday.

Specifically, it is expected that almost 229 billion kilowatt-hours kWh) will be generated from German renewable energy sources in 2018. Further, some months — January, April, May, and likely December — will have seen renewable energy generate as much as 43% of the country’s electricity.

“In 2018 Germany achieved a record share of renewables. That’s good,” said Stefan Kapferer, Chairman of the BDEW Executive Board. “However, the current pace of construction will not be enough to meet the 65% target by 2030. We therefore need special tenders for offshore wind quickly — so far potential is given away. In addition, we need planning and investment security for wind onshore projects. It is all the more important that the promotion of acceptance for wind power projects and the urgently needed grid expansion is now at the top of the energy policy agenda.”

Renewable energy in Germany“The electricity in Germany is getting greener. That’s a good sign,” added Professor Frithjof Staiß, Managing Director of the ZSW. “Now, in addition to a growing share of wind and solar power, we also need to expand flexibility options so that the growing supply of green electricity can be optimally aligned with demand. Politicians must design the framework conditions in such a way that the use of storage, demand-side management and the like is worthwhile.”

Onshore wind is expected to finish the year remaining on top with almost 94 billion kWh, an increase of almost 7% over 2017. Biomass is in second place with 52 billion kWh, up marginally on 2017, while solar PV comes in third with over 46 billion kWh, recording an impressive increase of 18% on 2017’s levels. Offshore wind will increase its contribution by just under 10% to 19 billion kWh, while hydropower has suffered significant decline due to the prolonged drought in the region.