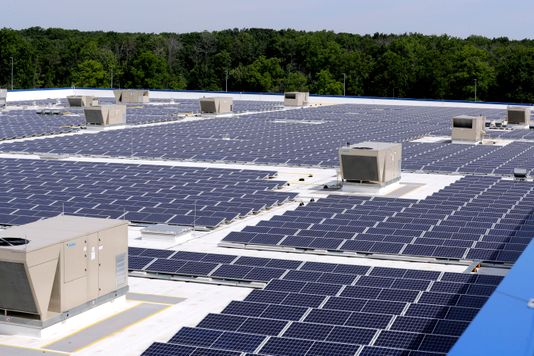 For several months now, solar panels and other equipment have been sitting in a warehouse owned by the City of Milwaukee.

The idea was to add solar power to seven city buildings, saving money while moving a step closer toward meeting the city’s long-term environmental goals.

The project, set to begin last fall, was put on hold after We Energies refused to connect it to the utility’s system, contending that the project is illegal under state law.

The dispute is an example of how state policy could spur or hinder the development of solar power — and determine the future reach of We Energies and other utilities’ existing monopolies.

We Energies’ position is the company that will install the solar panels — Eagle Point Solar, of Dubuque, Iowa — initially will own a majority stake in the project, and the Public Service Commission bars solar projects owned by so-called third-parties.

The commission’s policy, which is a bit murky, deems projects owned by companies such as Eagle Point Solar as public utilities, even if they sell power only to one customer — in this case, the city.

To proponents of solar power, the commission’s policy limits customers’ options and hinders the development of renewable energy in the state.

“They should not be boxing out competition,” said Tyler Huebner, executive director of Renew Wisconsin, a nonprofit organization that promotes renewable energy.

At the same time, the commission on Dec. 20 approved a We Energies pilot program that in many ways will do what Eagle Point Solar and similar companies are barred from doing — albeit on slightly different terms.

Under the pilot program, We Energies will pay businesses, municipalities, school districts and nonprofit organizations for the right to install its own solar panels on the roofs of their buildings.

But in the We Energies program, known as Solar Now, the cost will be borne by We Energies’ customers.

Proponents of solar power and others contend that will give We Energies an unfair advantage, potentially stifling competition — and make no mistake, rooftop solar power projects are competition.

The cost of solar power has dropped sharply in recent years. That is expected to continue, albeit at a slower rate. And every rooftop solar project means less revenue and lower profits for We Energies and other utilities in future years.

That’s happening now: The new Ikea store in Oak Creek is a recent example. Those projects are financed by the businesses and organizations themselves or by the companies that install solar panels.

But some businesses and organizations — and even homeowners — may want turn-key projects in which a solar company provides the financing and oversees the maintenance.

We Energies has yet to take a position on Sunrun’s petition with the PSC.

It is reviewing the petition and the state’s utilities may file a response jointly, said Richard Stasik, director of state regulatory affairs for WEC Energy Group, the parent company of We Energies.

We Energies pilot program ‘well on its way’

The issue of third-party ownership — allowing companies to own rooftop solar panels and sell the electricity to one customer — comes into play for municipalities, school districts and nonprofit organizations, such as health systems, that don’t pay taxes and therefore can’t benefit from the investment tax credits available for solar power projects.

We Energies’ Solar Now pilot program approved this month could appeal to that market niche.

The program drew a range of supportive comments from businesses, such as ATI Forged Products in Cudahy, and government entities, such as Northland Pine School District in Eagle River. Both showed interest in partnering with We Energies.

“From our perspective, it is a very cost-effective opportunity for our customers to participate in renewable energy,” said Robert “Bert” Garvin, executive vice president of regulatory affairs for We Energies.

Under the Solar Now program, We Energies will:

Limit its size to 35 megawatts, with 10 megawatts set aside for government and nonprofit entities.
Pay customers a monthly lease payment for 20 years, based on a complex formula tied to the wholesale market for solar power.

The program is well on its way to being fully subscribed, Garvin said.

But We Energies could have a competitive advantage.

Customers who sign up for the Solar Now program won’t have to put up any of their own money. Instead, the cost will be paid by We Energies’ customers, and the utility will earn a profit, or return, on the project for the next 30 years.

In contrast, when a business installs its own solar panels, it has to come up with the money on its own.

To We Energies, the Solar Now project is no different than when the utility adds new generating capacity, such as a new power plant, or makes other investments.

All of We Energies customers will benefit, Garvin said, because the utility will need additional generating capacity in the future and solar power reduces fuel costs.

But when We Energies builds a power plant, the cost and benefits in general are shared by all of its customers.

With the Solar Now program, the business or entity that leases its rooftop benefits, but the cost is passed on to all of We Energies’ customers, said Tom Content, executive director of the Citizens Utility Board of Wisconsin.

We Energies also has competition to install solar panels, and with those projects, the costs are borne by the customer who benefits.

Those projects could result in We Energies’ needing to add less generating capacity in the future, which could lessen future rate increases.

Allowing third-party ownership of solar projects would encourage a competitive marketplace, Content said. And it would provide a benchmark of sorts, enabling businesses and other entities to compare We Energies’ offer with that of private developers.

“This is where customers should be allowed options,” Content said. “You get three quotes and see which one is the best.”

That’s the position of Renew Wisconsin and other proponents of solar power.

The exceptions are allowed because the projects differ in their details, said Martin Day, who oversees energy regulation for the PSC.

But he added, “Everyone would like more clear, definitive direction on this.”

For its part, We Energies’ supports the PSC’s policy.

Any change in the policy, Garvin said, would affect all of the state’s electric utilities.

Utilities have a legal obligation to provide power to all of their customers, including those who generate their own electricity through solar power. In other words, utilities have to design and build their systems to supply electricity to customers who buy power only when needed, such as on cloudy days.

The cost of being able to do that is borne by all of the utility’s customers.

That said, utilities build their systems to meet peak demand, and solar power is ideal for meeting that demand in Wisconsin, generating the most electricity on hot, sunny days when the demand for electricity spikes.

Renew Wisconsin has asked the PSC that We Energies be barred from marketing its Solar Now program to customers who plan their own solar projects.

We Energies is lobbying the City of Milwaukee, for instance, to abandon its planned project, contending that the city would save more money by participating in the Solar Now pilot program.

We Energies estimates that the city would save $1 million to $1.5 million over 20 years compared with the city’s project with Eagle Point Solar.

The city estimates that it would save $20,000 to $30,000 a year from its planned project, said Erick Shambarger, who oversees the city’s environmental initiatives. But the savings could increase in future years depending on We Energies’ retail rates.

The city structured its project, estimated to cost $1.8 million, in a way to sidestep the PSC’s policy on solar projects owned by third parties such as Eagle Point Solar.

“We felt it was legal,” Shambarger said.

Eagle Point Solar encountered the same problem in Iowa and eventually won a lawsuit that went to the state Supreme Court, said Barry Shear, the company’s president and owner.

“They don’t want the competition,” he said of utilities. “That is the underlying rationale.”

But he said the city and Eagle Point Solar seem to be making progress in their discussions with We Energies.

“It’s an interesting situation,” he said. “It’s about solar energy, but it also is about the bigger issue of competition.”