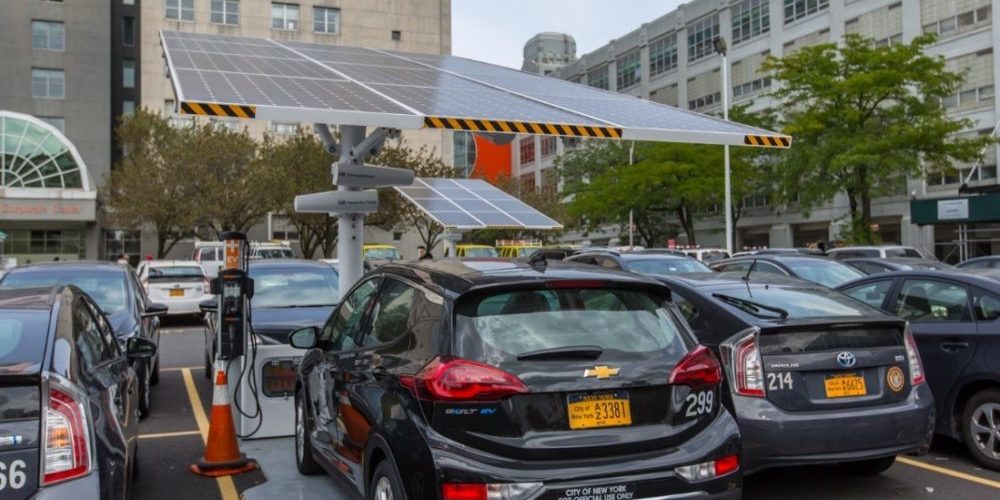 Resilience is one of the words of 2018 in the energy industry. Home energy storage was brought into focus after multiple large hurricanes struck the United States over the last two years, with Puerto Rico and Houston seeing widespread damage. What about your car though?

New York City will be installing 50 dual axis tracking off-grid, movable, solar electric vehicle chargers across the city. These 50 units add to the already installed 37, and will be complemented by at least 100 more charging stations (not noted if solar or standard) in the next two years. These off grid solar charging spots add to the more than 529 electric charging spots located in the five boroughs.

New York City aims to have 2,000 electric vehicles (EVs) on the road by 2025, and has more than 1,700 in place currently. Officials note that so far in Fiscal Year 2018 EVs achieved an average fuel economy of 100 miles per gallon for light duty fleet vehicles. Each carport will offset half its cost through gasoline savings over its expected lifespan.

The EV ARC is manufactured by Envision Solar. Citing its experience, New York City estimates that two to three Nissan Leafs can be charged per day by these units, which cost $61,000 each. New York City thinks the units will generate 650,000 solar powered electric vehicle miles per year.

The solar carports require no installation and can be moved around using the city’s flatbed tow trucks.

The units can hold nine or twelve 60-cell solar modules. The lithium ion battery was noted as holding more than 21 kWh of stored electricity.

The city is also pushing for further EV development in the five boroughs as part of the NYCx Climate Action Challenge aiming to get rid of all gasoline vehicles.

The City says the units generate 39 kWh/day, and can fully charge a Chevy Bolt EV in nine hours, and a Nissan Leaf in a bit less. The battery, which is charged in the daytime along with the system charging the car, is used to charge the cars at night.