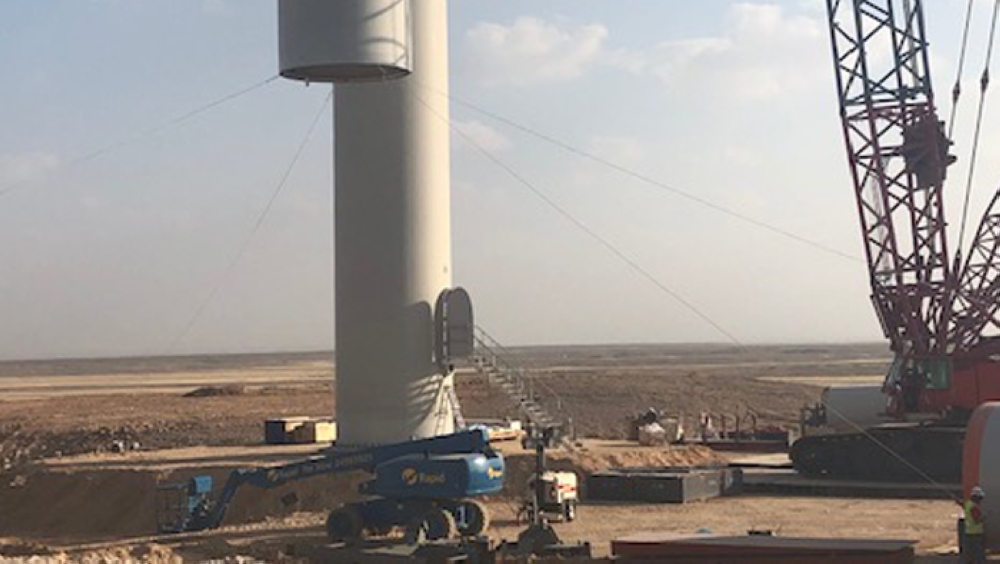 Masdar, the Abu Dhabi Future Energy Company, announced on Wednesday the installation of the first of 13 turbines at the 50 megawatt (MW) Dhofar Wind Farm. Located in the southern Omani governorate of Dhofar, the project is fully financed by Abu Dhabi Fund for Development (ADFD), the leading national entity for international development aid.

The project follows an agreement signed in 2014 between Masdar and the Rural Areas Electricity Company of Oman (Tanweer). A Masdar-led consortium, including GE and Spain’s TSK, is developing the Gulf region’s first large-scale commercial wind farm.

GE is providing the project’s 3.8MW wind turbines, while TSK is responsible for the rest of the wind farm’s infrastructure, which includes medium- and high-voltage substations and 13-kilometres of overhead transmission lines. Masdar is the project developer and implementation lead.

Eng Saleh Bin Nasser Al Rumhi, Chief Executive Officer of Tanweer, said: “We are looking forward to the implementation of this initiative, which will be the first large-scale renewables project in Oman. Our team has worked closely with all the participants to bring this technology to the Sultanate and to ensure knowledge transfer in the country.”

“Tanweer’s mandate is to supply electricity to large areas in Oman, and this project fits well with our expertise and ambition. The company is licenced to generate, transmit, distribute, and supply electricity in the concession areas. Our customers include cities, villages, and local communities scattered across almost 75 per cent of the land area of the Sultanate. We are also looking to implement other renewable technologies, including solar PV, to augment our existing generation plants across 11 site locations,” he added.

The Dhofar Wind Farm is expected to become operational by the third quarter of 2019. It will supply seven per cent of the Dhofar governorate’s electricity demand, or enough clean energy to power an estimated 16,000 homes, while offsetting an estimated 110,000 tonnes of carbon dioxide emissions annually.

Once complete, the wind farm will be handed over to Tanweer, which will then operate the plant and supply the generated electricity to the local Dhofar power grid through an overhead power line managed by the Oman Electricity Transmission Company (OETC).

The Oman Power and Water Procurement Company (OPWP) will offtake the generated electricity from Tanweer in line with a power purchase agreement (PPA) signed on September 12, 2017.

Mohammed Saif Al Suwaidi, Director General of ADFD, said: “We are steadfast in our commitment to funding renewable energy projects that benefit socio-economic sectors and reduce harmful emissions. ADFD is proud to work alongside its national and international partners and bring the Gulf’s largest wind farm to Oman.”

“Not only will the electricity generated by the Dhofar project help in supporting Oman’s growing energy demand and economic growth, it is also expected to help reduce domestic reliance on gas for electricity generation. This supply can soon be redirected towards more valuable industrial uses and to preserve natural gas resources,” he added.

Mohamed Jameel Al Ramahi, Chief Executive Officer of Masdar, said: “As a global leader in wind energy technology, we are proud to support the Sultanate in the realisation of its renewable energy ambitions, and are deeply committed to our partnership with Abu Dhabi Fund for Development and the world-class consortium, in delivering this milestone wind energy project on schedule and to the highest operational standard.”

All 13 turbines are scheduled to be installed by March.

Dr Manar Al Moneef, General Manager, GE Renewable Energy for the Middle East, North Africa, and Turkey, said: “The wind farm features our 3.8-130 wind turbine customised to the desert conditions specific to the Gulf region. The country has immense untapped potential in renewable energy, particularly wind energy. With this project, we are demonstrating our strong commitment to supporting the diversification of the energy mix in Oman and the wider region.”

Joaquin Garcia Rico, CEO of TSK, said: “We are very proud to have been awarded this important project in the Sultanate, a country where we have found great people and impressive opportunities to work together with local companies and share our knowledge and technology with them.”

“We are also delighted to have a client such as Masdar, a company that is contributing to improving the energy infrastructure and living standards in different countries. On this project, we are working together with our long-term partner GE and remain confident that we will achieve success, just as we have done in other countries,” he added.