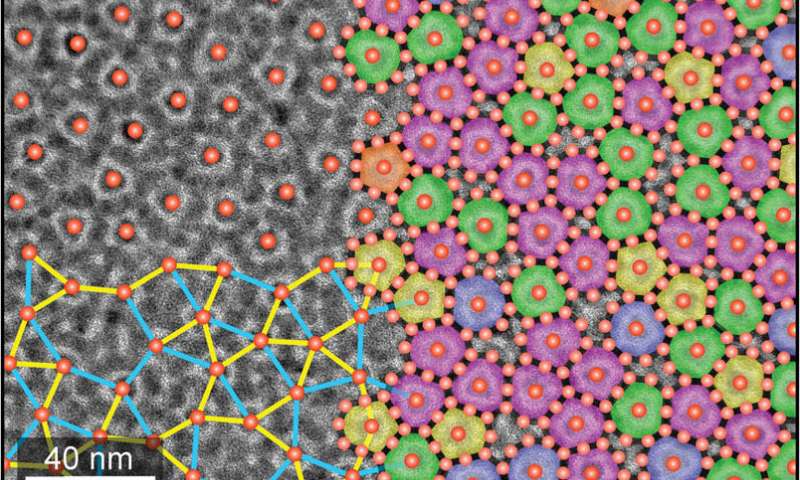 The strange class of materials known as quasicrystals has a new member. In a paper published on Thursday, Dec. 20, in Science, researchers from Brown University describe a quasicrystalline superlattice that self-assembles from a single type of nanoparticle building blocks.

This is the first definitive observation of a quasicrystalline superlattice formed from a single component, the researchers say. The discovery provides new insight into how these strange crystal-like structures can emerge.

“Single-component quasicrystal lattices have been predicted mathematically and in computer simulations, but hadn’t been demonstrated before this,” said Ou Chen, an assistant professor of chemistry at Brown and the paper’s senior author. “It’s a fundamentally new type of quasicrystal, and we’ve been able to figure out the rules for making it, which will be useful in the continued study of quasicrystal structures.”

The first quasicrystalline materials discovered were metal alloys, usually aluminum with one or more other metals. So far, these materials have found use as non-stick coatings for frying pans and anti-corrosive coatings for surgical equipment. But there’s been much interest in making new types of quasicrystal materials—including materials made from self-assembling nanoparticles.

Chen and his colleagues hadn’t originally set out to research quasicrystals. Much of Chen’s work has been about bridging the gap between the nanoscale and macroscale worlds by building superstructures out of nanoparticle building blocks. About two years ago, he designed a new type of nanoparticle building block—a tetrahedral (pyramid-shaped) quantum dot. Whereas most research on building structures from nanoparticles has been done with spherical particles, Chen’s tetrahedra can pack more tightly and potentially form more complex and robust structures.

Another key feature of Chen’s particles is that they’re anisotropic, meaning they have different properties depending upon their orientation relative to each other. One face of each pyramid particle has a different ligand (a bonding agent) than all other faces. Faces with like ligands tend to bond with each other when the particles assemble themselves into larger structures. That directed bonding makes for more interesting and complex structures compared with particles lacking anisotropy.

In research published recently in the journal Nature, Chen and his team demonstrated one of the most complex superstructures created to date from nanoparticle building blocks. In that work, the superstructures were assembled while the particles interacted with a solid substrate. For this latest work, Chen and his colleagues wanted to see what kind of structures the particles would make when assembled on top of a liquid surface, which gives the particles more degrees of freedom when assembling themselves.

The team was shocked to find that the resulting structure was actually a quasicrystalline lattice.

“When I realized the pattern I was seeing was a quasicrystal, I emailed Ou and said ‘I think I’ve found something super-great,'” said Yasutaka Nagaoka, a postdoctoral scholar in Chen’s lab and the lead author of the new paper. “It was really exciting.”

Using transmission electron microscopy, the researchers showed the particles assembled into discrete decagons (10-sided polygons), which stitched themselves together to form a quasicrystal lattice with 10-fold rotational symmetry. That 10-fold symmetry, forbidden in regular crystals, was a telltale sign of a quasicrystalline structure.

The researchers were also able to divine the “rules” by which their structure formed. While decagons are the primary units of the structure, they are not—and cannot be—the only units in the structure. Forming a quasicrystal is a little like tiling a floor. The tiles have to fit together in a way that covers the entire floor without leaving any gaps. That can’t be done using only decagons because there’s no way to fit them together that doesn’t leave gaps. Other shapes are needed to fill the holes.

The same goes for this new quasicrystal structure—they require secondary “tiles” that can fill the gaps between decagons. The researchers found that what enabled their structure to work is that the decagons have flexible edges. When necessary, one or more of their points could be flattened out. By doing that, they could morph into polygons with nine, eight, seven, six or five sides—whatever was required to fill the space between decagons.

“These decagons are in this confined space that they have to share peacefully,” Chen said. “So they do it by making their edges flexible when they need to.”

From that observation, the researchers were able to develop a new rule for forming quasicrystals that they call the “flexible polygon tiling rule.” That rule, Chen says, will be useful in continued study of the relatively new area of quasicrystals.

“We think this work can inform research in material science, chemistry, mathematics and even art and design,” Chen said.