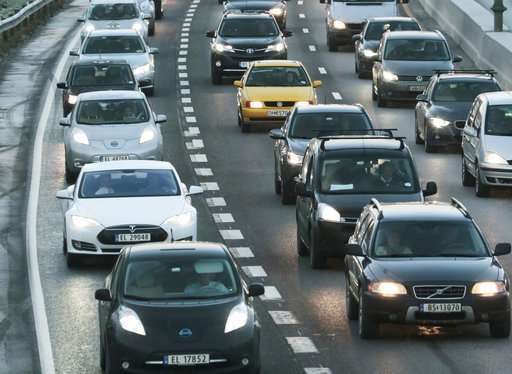 A silent revolution has transformed driving in Norway.

Eerily quiet vehicles are ubiquitous on the fjord-side roads and mountain passes of this wealthy European nation of 5.3 million. Some 30 percent of all new cars sport plug-in cables rather than gasoline tanks, compared with 2 percent across Europe overall and 1-2 percent in the U.S.

As countries around the world—including China, the world’s biggest auto market—try to encourage more people to buy electric cars to fight climate change, Norway’s success has one key driver: the government. It offered big subsidies and perks that it is now due to phase out, but only so long as electric cars remain attractive to buy compared with traditional ones.

“It should always be cheaper to have a zero emissions car than a regular car,” says Climate and Environment Minister Ola Elvestuen, who helped push through a commitment to have only sell zero-emissions cars sold in Norway by 2025. The plan supports Norway’s CO2 reduction targets under the 2015 Paris climate accord, which nations last agreed rigorous rules for to ensure emissions goals are met.

To help sales, the Norwegian government waived hefty vehicle import duties and registration and sales taxes for buyers of electric cars. Owners don’t have to pay road tolls, and get free use of ferries and bus lanes in congested city centers.

These perks are being phased out in 2021, though any road tolls and fees would be limited to half of what gasoline car owners must pay. Gradually, subsidies for electric cars will be replaced by higher taxes on traditional cars.

Registration tax on new cars is paid on a sliding scale with a premium for the amount of emissions produced. Elvestuen pledges that the incentives for electric vehicles will be adjusted in such a way that it does not scupper the 2025 target.

“What is important is that our aim is not just to give incentives,” he says. “It is that we are taxing emissions from regular cars.”

Using taxes to encourage consumers to shift to cleaner energy can be tricky for a government—protests erupted in France this autumn over a fuel tax that hurt the livelihood of poorer families, especially in rural areas where driving is often the only means of transportation.

In this sense, Norway is an outlier. The country is very wealthy after exporting for decades the kind of fossil fuels the world is trying to wean itself off of. Incomes are higher than the rest of Europe, as are prices.

Some 36 percent of all new cars sold are SUVs, which provide safety in the country’s tough winters. Tesla’s SUV, the Model X – the motor of choice for well-to-do environmentally-minded Norwegians – costs around 900,000 Norwegian kronor ($106,000).

“Buying a Tesla model X is not much more expensive than buying a standard premium Volvo because gasoline cars are taxed heavily. That is also the reason Teslas sell well,” says Christina Bu, General Secretary of the Norwegian Electric Vehicle Association.

To date, with its longer battery life, Tesla has dominated the upmarket family car space for electric vehicles, but more premium marques are entering the market, like the Audi Quattro e-tron. Demand is still outstripping supply, with Norwegians having to wait up to a year to get their hands on the steering wheels of their new electric vehicles.

Norway has pledged to reduce emissions of greenhouse gases by 40 percent by 2030, compared with 1990 levels. The country has work to do: by 2017, emissions were up 3 percent compared to the 1990 baseline. Cutting emissions from road transport will allow Norway to reduce the amount it has to spend buying up emissions certificates from other European countries to meet its target. The savings are likely to run into billions, potentially balancing out the cost of subsidizing electric cars.

Norway is looking to China for help in developing the market.

China has invested heavily in electric vehicles as it looks to meet its own Paris climate accord commitments, to clean up its choking cities and to get in early in a growing area of manufacturing. In October, 6 percent of new cars were electric, according to the China Association of Automobile Manufacturers, up almost 50 percent from a year earlier. The market has huge growth potential, experts say, and like Norway, the market boom has relied on government incentives.

The hope in Norway is that the sheer size of China’s market will encourage the industry to develop the technology more quickly—improving battery life, for example—and force down prices.

Battery life on smaller vehicles is slim and the resale market is untested. Fast battery charging points are slow compared with gasoline pumps, and on Norway’s often empty mountain roads, these points are uneconomical despite government subsidies for the private companies that set them up.

Even in city centers, construction of such points has not kept pace with sales. At one station in Oslo, a Tesla driver cracks open his laptop while his car charges. Another, Ida Vihovde, drums her fingers as she waits for a charging station to free up.

“If the government put up more of these it would be OK,” she says beside her electric VW Golf. “Right now there are no more chargers so I have to sit and wait.”