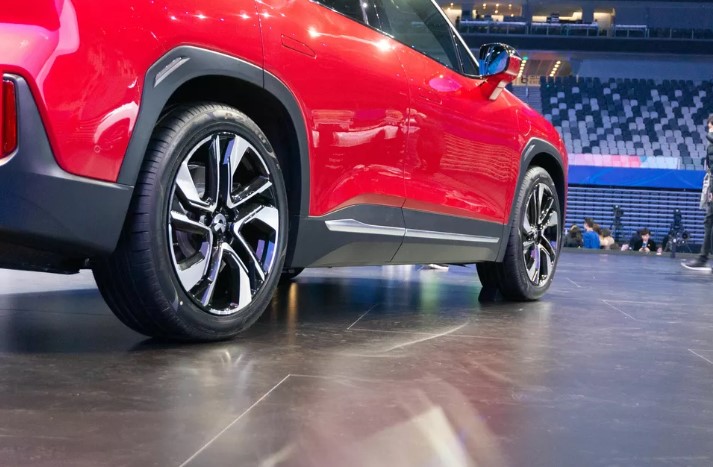 At the second-annual Nio Day in Shanghai, Chinese electric automaker Nio unveiled its second production car. Meet the Nio ES6, a 300-plus mile electric SUV with a swappable, upgradable battery.

The ES6 is the follow-up to Nio’s ES8 SUV, which debuted last year. The new model is smaller and shorter overall (about 190 inches); it steps down to a five-seater configuration from the seven-passenger ES8, but features the same 114.2-inch wheelbase due to the cars sharing the same platform and underpinning architecture. With its more compact take on the ES8’s aesthetic, however, the new ES6 does look sharper and more athletic than its sibling.

The ES6 Performance model upgrades the rear motor to a 240 kW unit, bringing the total to a rear-biased 536 horsepower and 535 pound-feet of torque combined. The zero-to-62 mph sprint is shortened to 4.7 seconds at this spec, but the top speed is just 124 mph (200 km/h) for both the standard and performance trims.

Buyers will also have their choice of two batteries: there’s the same 70 kWh lithium-ion pack from the ES8 and a new 84 kWh option. Both packs are the same size and feature similar liquid thermal management systems, but the 84 kWh option is more energy dense.

The ES6’s claimed range looks impressive, but will vary depending on the performance spec and battery chosen. The Standard model will do 255 miles with the standard battery and 298 miles with the 84 kWh unit. Meanwhile, the Performance ES6 steps up to 267 miles standard and 317 miles with the bigger battery. All of those estimates are on the NEDC testing standard, which typically averages higher than the US EPA driving cycle for electric cars.

Charging those big ol’ batteries can takes as little as 48 minutes to 80-percent or 90 minutes to a full charge on the 420-volt, 250-amp DC fast-charging port on the passenger-side front fender. There’s also a 220-volt, 32-amp AC charging port on the driver-side fender that can recharge the 70 kWh battery in 10 hours and the 84 kWh pack in 12 hours.

Through the Nio app for smartphones, ES6 drivers will also have access to what the automaker calls One-Touch-Power. Simply tap in the app and a Nio Power attendant will schedule and recharge your car for you — whether that means taking your car to a fast-charging station, arriving with a Nio Power truck for remote recharging, or using one of Nio’s battery swap stations scattered around the Chinese highway system.

That last detail, battery swap, is interesting. Because Nio’s battery packs use the same dimensions, bolt patterns and cooling system for the ES6 and ES8, both cars can use the same automated battery swap stations, which can replace a dead pack with a fully charged battery in about five minutes. This detail also means that the ES6 and ES8’s batteries are now upgradable. Users of either SUV who start with the 70 kWh pack can opt to upgrade to the bigger battery for an additional fee. And if Nio figures out how to cram even more power into the same shell next year, those users would be able to upgrade again.

The rest of the Nio ES6’s hardware is familiar to the ES8. The SUV’s body and chassis is made of 91-percent lightweight aluminum, but now features a bit of carbon fiber in the construction of its chassis “skateboard” to add stiffness and lightness. The suspension is a double wishbone setup up front and multilink gear out back with standard active dampers. An Active Air Suspension adds ride height adjustment and better ride quality fine-tuning for Performance models.

A feature similar to Tesla’s “Summon” allowed Li to remotely call the ES6 via smartphone without a human in the driver’s seat, steering itself around a corner and coming to a stop on stage. The Nio Pilot suite also includes a hands-off Highway Pilot feature that steers, accelerates and brakes at highway speeds while the driver watches the road, and a low-speed Traffic Jam Pilot system. These features were announced with the ES8’s launch last year and will be available via over-the-air software update to ES6 and ES8 drivers.

Users can shave 100,000 yuan ($14,403) from the purchase price by opting for Nio’s battery subscription program where you lease the battery from Nio, bringing with it battery upgrade services, roadside assistance, wireless connectivity and the Nio Power nationwide charging services, all for 1,280 yuan per month ($185).

Like the ES8, the Nio ES6 will only be available in China for the foreseeable future. When asked about North American and European availability, Li would only state that the company was looking into if, how, and when global expansion would make sense, but is currently focusing on the Chinese market.