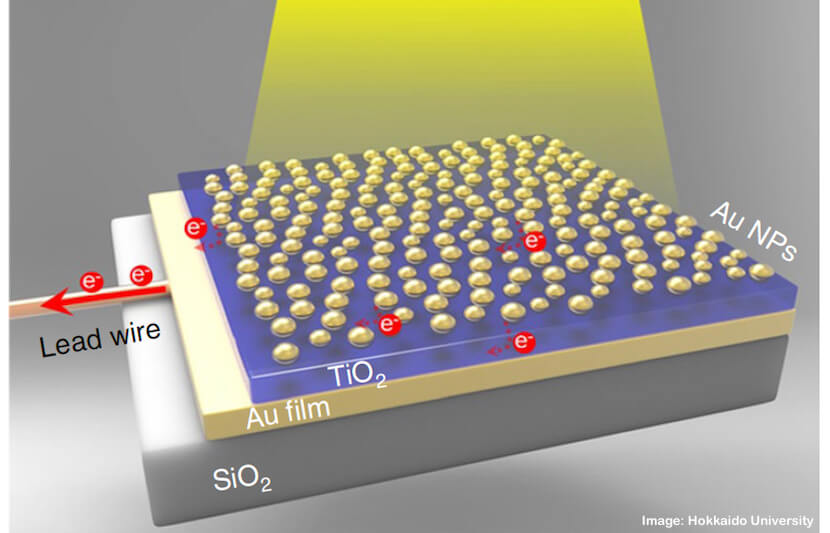 Carbon pollution is continuing to pile up in the atmosphere. Time is of the essence with finding an effective, sustainable energy alternative for fossil fuels.

Now, new research from Hokkaido University in Japan could catapult a widespread transition to solar energy.

The Hokkaido scientists have developed a photoelectrode that can harvest 85 percent of all visible light and use it to create hydrogen by splitting water.

“Using very small amounts of material, this photoelectrode enables an efficient conversion of sunlight into renewable energy, further contributing to the realization of a sustainable society,” the researchers wrote in their report.

The researchers refer to their invention as the “golden sandwich,” due to its physical makeup.

To construct the device, the research team sandwiched a 30-nanometer titanium dioxide thin-film semiconductor between a 100-nanometer-thick gold film and gold nanoparticles.

“Our photoelectrode successfully created a new condition in which plasmon and visible light trapped in the titanium oxide layer strongly interact, allowing light with a broad range of wavelengths to be absorbed by gold nanoparticles,” Hiroaki Misawa, a professor in the Research Institute for Electronic Science at Hokkaido University and lead author of the study, said in a statement.

“The light energy conversion efficiency is 11 times higher than those without light-trapping functions,” Misawa continued.

A full paper describing the study is published in the journal Nature Technology.

Hydrogen can serve as an effective tool for transporting and delivering clean energy. Although it is very abundant, it usually comes attached to another element in the form of a compound.

Today’s hydrogen mostly comes from natural gas, which is often unnaturally extracted from the ground through fracking. People are rightfully hesitant to garner hydrogen by using this traditional method because it is not environmentally sustainable.

The team’s new device, however, leads to the derivation of hydrogen by splitting water molecules. Electrons separate hydrogen ions into hydrogen, and remaining electron holes produce oxygen by oxidizing water.

The device is still very new, so it hasn’t hit the market yet. But it is a huge step in the right direction, and if the consumer costs can stay low, it could revolutionize renewable energy.