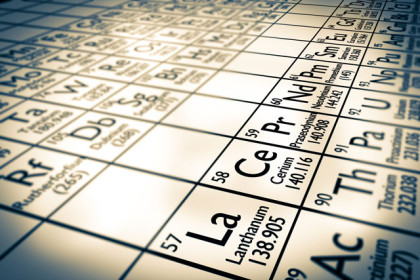 A rare-earth-free permanent magnet with properties approaching those of neodymium-based formulations has been created by researchers in France. Speaking at the 9th Joint European Magnetic Symposia (JEMS2018) last week, Lise-Marie Lacroix of the Laboratoire de Physique et Chimie des Nano-objets (LPCNO) in Toulouse described her group’s efforts to sidestep the need for rare-earth elements by using cobalt nanorods instead. Guillaume Viau, also at LPCNO, led the research.

Rare-earth magnets are the strongest permanent magnets yet created and are favoured wherever a strong field is needed in a compact package. Since their discovery in the 1960s, these magnets have become indispensable components of the lightweight motors used in computer hard-disks, power tools and electric vehicles.

Although the rare-earth elements might not be as scarce as their name suggests, they are distributed unequally across the globe, and China has come to dominate production. Combine this fact with the diverse applications for which these magnets are vital, and it’s not hard to see why both Europe and the US have instituted programmes to develop alternatives.

The key structural characteristic that explains rare-earth magnets’ exceptional strength is their microscopic anisotropy. The long, narrow crystals that comprise these materials show a pronounced directional dependence in their magnetic properties. It is the common alignment of these crystals during fabrication that produces the strong field of the bulk magnet. The resilience of the arrangement results in the material’s high coercivity.

To replicate this structure, Lacroix, Viau and colleagues first reduced a precursor cobalt compound via the polyol process—a well-known and commonly used way of producing metallic nanoparticles. “The basic idea we start from is as simple as building a new object with Lego. In our case, the individual building blocks are cobalt nanorods that we prepare by chemistry. We are now capable of producing a few grams of these rods in one batch,” Lacroix told physicsworld.com.

To form a macroscopic magnet from the suspension of nanorods, Viau’s group—working with Oliver Gutfleisch of TU Darmstadt, Germany—aligned the particles in an external magnetic field and subjected them to high pressure. Heating during compaction was found to affect the performance of the resulting magnet, so the group used a cold compression method. The researchers opted not to use a binder so that the magnetic volume fraction could be kept as high as possible. Van der Waals forces between the particles were sufficient to produce a bulk material with appropriate mechanical properties.

Since nanorods with the highest possible aspect ratio would yield the greatest structural anisotropy, one might expect that the longest, thinnest particles would produce the most effective magnets. Although coercivity did increase with aspect ratio, at ratios above 12 the trend ceased and even reversed. Viau’s team deduced that the greater number of defects in the longest crystals offer more initiation points for domain reversal, and therefore limit coercivity values.

The optimal magnetic properties were found to be exhibited by nanorods around 10 nm across and 70 nm long, which the researchers achieved by varying the type and concentration of the nucleating agent: more nucleation sites mean that fewer cobalt atoms are available per nanoparticle, limiting crystal growth.

The nanorods’ length and thickness are not the whole story, however. The group also discovered that magnetic domains can be flipped by electric charges at the tips of the cobalt particles, with the resulting domain boundaries propagating down the length of the nanorod. Making the particles ellipsoidal and “tipless” would solve the problem, but such morphologies are not obtainable by chemical synthesis. The researchers found a compromise by tuning the surfactant concentration to produce particles as uniformly cylindrical as possible.

Reproducing the structure of rare-earth magnets in this way might reduce reliance on Chinese production to some extent, but using cobalt alone cannot be the complete solution. Demand for this element is rising due to its use in batteries, and its extraction process is a cause of ethical and environmental concern. This means that strong permanent magnets based on cobalt nanorods are most suited to small-scale applications in microelectronics, and will not replace rare-earth magnets in large engineering projects like wind turbines and maglev systems.

But though cobalt itself represents an imperfect replacement, the work demonstrates a powerful new technique. “This result is to our knowledge the first proof of concept of the potentiality of the bottom-up approach for the fabrication of hard magnetic materials,” says Lacroix. “There is still a lot of exploring needed to optimize the material, but it is really exciting to know that this fairly simple idea of playing Lego with nanoparticles comes to reality.”

Now the researchers are turning their attention to other alternatives, focusing first on iron-based nanoparticles. More common and environmentally benign than cobalt, iron presents a new set of challenges. Whereas cobalt nanoparticles grow preferentially along a single crystal axis, iron is naturally much more isotropic. This means that the structural anisotropy required to match the performance of rare-earths is much harder to realise in aggregates of iron nanoparticles.

Lacroix explains: “I’m not sure if we could totally replace rare-earth-based magnets with iron-based materials. One problem will come from the reduced coercivity that one can except from iron nanorods. For some uses this will be too small, but for specific applications it could be a good alternative.”